Lopetegui: "The worse the scenario is, the stronger I am" 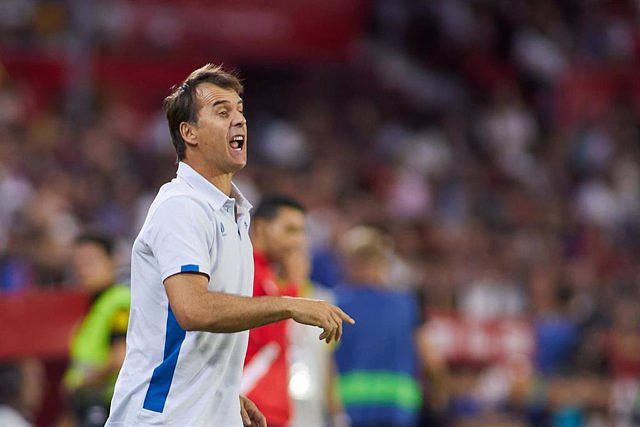 Sevilla's coach, Julen Lopetegui, has assured that he is "strong" despite the "complex moment" that the team is going through, after conceding a new defeat against Manchester City (0-4), a "superior" rival, in the debut in the group stage of the Champions League, and has warned that they must "clear as soon as possible" the "cloud" under which they are mired.

"The worse the scenario is, the stronger I am," he declared at a press conference, without wanting to talk about a possible dismissal. "I am not aware of what might happen, but of what I have to do, which is to convince this group that it is a competitive team. We have to turn it around and face the game against Espanyol with the utmost conviction. Here Nobody loosens up, you have to grit your teeth," he added.

In this sense, the Basque coach acknowledged that they are in "a complex moment" after conceding their fourth defeat in five games. "We have a cloud that we must clear as soon as possible. For different reasons, we have reached these circumstances. We are not at our cruising speed, and the only way to turn that around is to think about LaLiga", he explained.

"We have to assume and accept this situation and turn it around, although it is complete. The only way to get out of a dynamic is to surround it and not let it escape, and that is done from inside the locker room. It is what we are going to try to do by optimizing the resources we have," he continued.

On the other hand, Lopetegui did not question the whistles of the fans and the shouts calling for the resignation of the Sevilla president. "The people are sovereign. Today I have felt the energy of all the fans again, supporting us in a complex moment. They understand that the team needs that support. It is normal that they are angry, because the team has lost two consecutive games at home, and we have to reverse that situation. We have to be able, with facts in the field, to turn the situation around," he said.

Regarding Tuesday's game, he did not hide the superiority of the 'citizen' team. "City deserved to win the game because they were superior. Within the game we have had two moments in which we have been able to do a little more damage to them, they have had difficulty reaching the goal. They are a very good team, the most complete that exists, because he is capable of submitting all rivals, and now with the speed and effectiveness of a player they did not have. That means that in the first goal situation they have had they have managed to score", he indicated.

"In the second half, when we were at our best in the match, a loss came and it was 0-2. Logically, the match is different; we have included players who are not yet in the best shape but who need minutes, and there we have we had an exchange of blows in which we conceded more goals", he continued, before explaining his decision to bet on Isco at the top. "We needed to compete with City and have the ball to be able to turn the game around," he concluded.