Lopetegui: "Manchester City is much more than Haaland"

"Pep Guardiola is the best coach in the world". 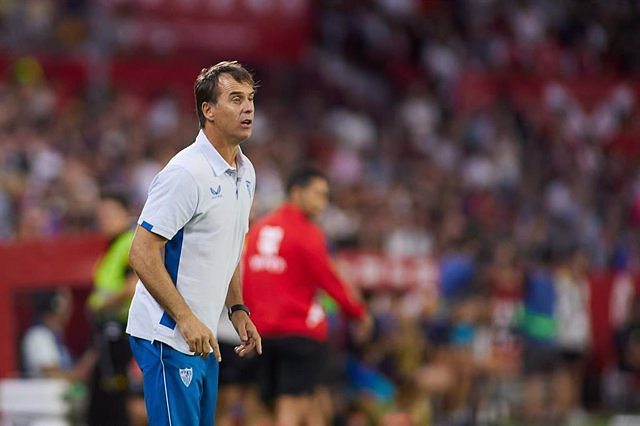 "Pep Guardiola is the best coach in the world"

"Stories are written at the end of courses"

The Sevilla FC coach, Julen Lopetegui, stated that Manchester City, his next rival this Tuesday in the Champions League opener, is "much more" than striker Erling Haaland, although the arrival of the Norwegian allows him to have more of an alternative to Pep Guardiola's team, "the best coach in the world".

"City without Haaland was an excellent team, one of the best in the world. Now it is stronger, more powerful and with more alternatives. If we start thinking only about the rival, we are not finished. I prefer not to talk about a player individually because I should do it practically everyone", said Lopetegui at the press conference prior to the match.

The coach of the team from Nervion showed his enthusiasm for playing for the third consecutive year in the 'Champions'. "We have earned the right. We will do it against an excellent team, such as City. We are by right and we want to enjoy it by playing a good game," he added about Pep Guardiola's men, "the best coach in the world" for his counterpart in the Andalusian painting.

To do this, they will try to leave behind the poor results achieved in LaLiga Santander, with one point out of a possible 12 in four days. "We want to boost the confidence of the boys, make them believe that the scenarios of September are reversed. There is a very long way, when you overcome adversity it makes you stronger", he pointed out.

Regarding the last game of the domestic competition against FC Barcelona, ​​where Ramón Sánchez-Pizjuán fell silent with a 0-3 defeat, Lopetegui was critical. "We played more than 15 good minutes, we were not very forceful, unlike them, who punished us. The areas often determine what you do in the rest of the field," he stressed after the team's low effectiveness, with 3 goals.

In fact, his instability at the start of the course has meant the worst league debut in 41 years. "This is the fourth year that we are here, we have made history in the previous three years. We will work to continue making it, stories are written at the end of the courses," he said.

"It's easier to manage everything from victory. In defeat the team has shown itself to be strong. It has shown possibilities of overcoming big rivals at times. With the feeling of wanting to grow in adversity. They rip out a lung and a heart and you have to try to generate new ones quickly," he said.

Asked about the dismissal of Óliver Torres from the Champions League list, the coach acknowledged the "hard" decision. "We had to rule one out. It's not something good or pretty for him, I told him, he's a good professional. He'll try to reverse the situation. It was an unfair decision for one whatever it was, based on balancing different positions There are many parameters to make these decisions," he said.

The people from Seville are still waiting for Fernando and Erik Lamela, both injured after the duel against the Catalans, while Rekik "arrives just right" after being absent last Sunday. "Tomorrow we have a new competition that rewards the best teams of each season, and Sevilla is among them. We have to convey that enthusiasm and optimism," he said.