Liz Truss, the successor to the outgoing Prime Minister, Boris Johnson, has met this Tuesday with Queen Elizabeth II at Balmoral, where the monarch has invited the new tenant of 10 Downing Street to accept the position, thus ending the transfer of powers. 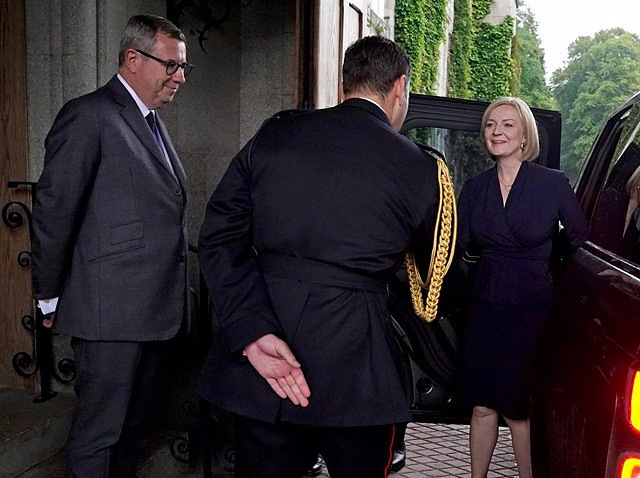 Liz Truss, the successor to the outgoing Prime Minister, Boris Johnson, has met this Tuesday with Queen Elizabeth II at Balmoral, where the monarch has invited the new tenant of 10 Downing Street to accept the position, thus ending the transfer of powers.

The already new British 'premier' has arrived at the private Scottish estate of Queen Elizabeth II with her husband Hugh O'Leary, where she has remained for about 30 minutes in the company of the monarch, who carried a cane, proof of her fragile state of health, according to the BBC network.

Due to the queen's mobility problems, the protocol has been changed for the first time in the history of the United Kingdom, so the meeting, which until now was held in Buckingham, has been held in Scotland, being the fifteenth reception that Elizabeth II performs in her 70 years of reign.

Truss has been appointed after the traditional kissing of hands in which, according to the tradition of the British crown, the candidate is invited to form a Government. After the symbolic institutional act, the new prime minister will go to number 10 Downing Street to give her first speech in office.

After the act, Buckingham has confirmed through a statement that Queen Elizabeth II has asked Truss to form a new Executive. "Truss accepted Her Majesty's offer and kissed her hands on her appointment as Prime Minister," she said in a statement collected by 'Independent'.

Hours earlier, it was the turn of the outgoing 'premier' Boris Johnson, who stressed during his speech that he would give his "fervent support" to Liz Truss before stressing that "it is a tough time for the economy and a tough time for families in the whole country".