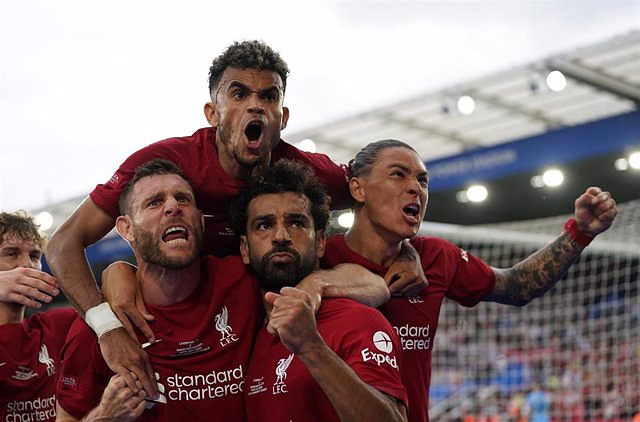 Liverpool won the Community Shield this Saturday, the first title of the season in England, after beating Manchester City (3-1) thanks to Mohamed Salah, decisive from eleven metres, and Darwin Núñez, infallible on his debut , to sentence the game played at the King Power Stadium.

Manchester City tried to redeem themselves after losing the title last season against Leicester City. And precisely they had the opportunity to do it at the 'foxes' stadium, a duel that did not have Wembley as its usual venue because the final of the Women's Eurocup will be played this Sunday at the legendary London stadium.

Thus, the 'reds' achieved their 16th 'Community' in their history and put an end to their bad streak in the English Super Cup, which they had not won since 2006 and which left them with honey on their lips in 2019 and 2020, by losing in penalties against the 'citizens' and Arsenal.

The duel of heights left the debut of the new emblems of Jurgen Klopp and Pep Guardiola. The Norwegian Erling Haaland did not have a pleasant day in his debut as a starter, while the Uruguayan Darwin Núñez acted as a shock to revolutionize his team, after provoking the decisive penalty and sentencing the final on a dreamy afternoon by scoring his first official goal .

Liverpool presented their cards with a renewed squad and with Alisson Becker and Diojo Jota out due to injury. But Klopp's men were up to the task and were the first to get ahead thanks to the prodigious right foot of Trent-Alexander Arnold, who opened the scoring with the help of Nathan Aké by deflecting the ball and dislodging Ederson.

In the second part, the VAR was decisive in both teams. For City, with an unexpected leader after the presence of an erratic Haaland, the Argentinian Julían Álvarez kept Guardiola's men alive and in his case he was able to debut with a goal (1-1).

Finally, Liverpool went ahead again from eleven meters with the maximum penalty from Salah, who did not need to be brilliant to unbalance a game from the penalty spot, a record where he exhibited his cold blood to caress the first title of the season.

The Egyptian grew up and in the addition he put a great ball so that Núñez sentenced the final with a lethal header. Thus, the Uruguayan won the first game against Haaland, knocked out in the 97th minute when he was left alone in front of the goal and crashed the ball into the crossbar.