Liverpool crashes in Naples and Bayern strikes in Milan 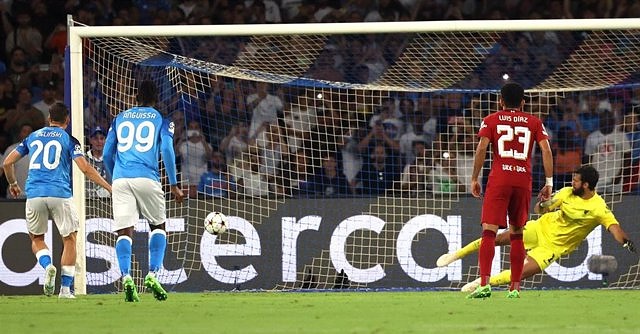 Liverpool, the current runner-up in Europe, got off to a bad start in the 2022-2023 Champions League when they were surprisingly beaten (4-1) on their visit to Diego Armando Maradona in Naples, while the German Bayern Munich got an important away win (0-2) against Inter Milan.

The 'reds' made it clear in their continental debut that they have not started with the best feelings and the doubts shown in the Premier League were transferred to a Napoli team that did not let the opportunity pass and achieved an important victory in Group A.

Although there were chances on both sides, in the first 45 minutes Diego Armando Maradona's scoreboard reflected an unexpected 3-0 at half-time. Zielinsky, from a penalty, Anguissa and Gio Simeone, son of 'Cholo', were on track for a victory that could be broader because Alisson saved a penalty and Van Dijk took a ball under the sticks.

The Polish midfielder brought the euphoria to the stands as soon as the second half began and two minutes later the Colombian Luis Díaz saved Liverpool's honor, although there were no more goals in a hectic game.

In the other match in Group A, Ajax started strongly and thrashed Glasgow Rangers 4-0, in a match that got back on track in the first half thanks to goals from Edson Álvarez, Berghuis and Kudus. Bergwijn closed out poker 'ajacied' in the final stretch.

In Group C, the attractive clash between Inter Milan and Bayern Munich ended with victory for the Munich team, which was very solid and did not need a great match to take three very important points.

Senegalese striker Sadio Mané showed that he could take over from Robert Lewandowski and was in charge of putting Julian Nagelsmann's men ahead before the half hour mark to settle a team that was more dangerous in the second half and controlled the duel better. D'Ambrossio's own goal in the 66th minute hurt Simone Inzaghi's men.

In Group C, Atlético, in addition to the rojiblancos, the Belgian Club Brugge also added the three points by defeating German Bayer Leverkusen 1-0 at their stadium with a goal from Abakar Sylla shortly before half-time.

Finally, in Group D, Tottenham won three key points at home against Olympique de Marseille, whom they beat with a brace in the final leg of Richarlison and against a rival who played with ten practically the entire second half, while Eintracht, champion of the Europa League, returned to the European Cup with a tough corrective in their stadium against Sporting de Portugal, who defeated them 0-3 with three goals in 17 minutes of the second half (Edwards, Trincao and Nuno Santos).