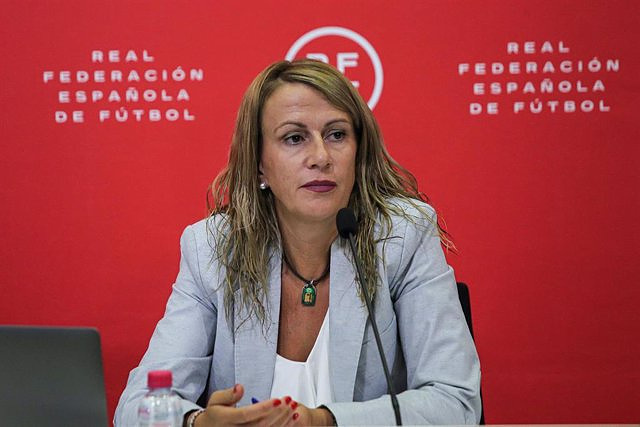 The F League and the Royal Spanish Football Federation (RFEF) also failed to reach an agreement this Tuesday on the working conditions of the competition's members after a day where they held two meetings, the second of them again with the mediation of the Superior Council of Sports (CSD).

If on Monday there was a glimpse of the hope that the situation that arose last Thursday due to the claim of the referees to be considered professionals and that prevented the first day from being played last weekend, would be unblocked, the scenario turned to complicate less than 24 hours later, in the absence of the members responding to the new offers.

In this case, the salary that the League continues to propose is 25,000 euros, which has already been rejected on other occasions, with the novelty in that of the assistants, at the proposal of the CSD, which would be 16,000, 2,000 euros more, going from charge 168 euros to 1,066, figures that do not seem to be approved by the referees.

"Yesterday Monday at nine o'clock at night I had a meeting with all the referees, I told them about the future of the meeting, how everything had gone and they felt undervalued and very disappointed", confessed Yolanda Parga after the meeting held in the morning between Liga F and the RFEF in the Ciudad del Fútbol de Las Rozas (Madrid).

From the F League, its general director, Pablo Vilches, stressed that "unfortunately there has been no agreement" despite the fact that they thought they had had a "small advance with the proposal offered by the CSD to both parties." "Today we have found that no, a resounding no, and, furthermore, the positions are still very distant," he confessed.

This change of script caused the CSD to urgently summon the two parties again at its headquarters starting at 5:00 p.m. to continue working on this release so that the second day can be played, but there were no significant advances.

"On Monday I left very happy and today in the morning I find that the RFEF informs us that the referees are not willing to accept the proposal," said Beatriz Álvarez Mesa, president of the F League, who was unable to attend the meeting in Las Rozas and that he had to leave the Council office early because he had to catch a flight.

The leader stressed that they had spoken with the clubs, "especially with the independents, who are the most vulnerable and who have to make a considerable effort." "They understand that these are steps in professionalization, but it is hurting us. We have to put a bit of income into women's football and we cannot enter 10 and spend 15, the competition must be sustainable," she warned.

In any case, he insisted that "for the sake of finding a solution and that there be a day", they arrived at this second meeting with "absolute willingness to give in", but that the federation "continues to convey that they are not willing". "We have reached this common point with a great effort and I don't think it is about dignity, we are already putting amounts on the table and I think they are totally proportionate and with an effort from the clubs to reach those salaries," he stressed. .

Beatriz Álvarez indicated that there was "another CSD proposal on the table" that meant "one more effort" for the F League and that before leaving she had asked for "a solution today". "But it seems that Yolanda wants, which is understandable, to pass it on to the collegiate members and I don't know if there will be an answer today," she pointed out.

The president of the F League believes that the proposal they made of 3,300 "full" euros was adjusted "to the context and reality" and that they "agree" that the assistants have the minimum interprofessional salary of 14,000 euros, although the CSD He has proposed that the minimum wage for players be raised to 16,000, "to start on an equal footing at all levels."

"If you ask me if I am optimistic when I have left there, the answer is no," said Alvarez Mesa, words that Pablo Vilches later ratified. "No, there is no agreement, although perhaps not, I don't say it with the same bluntness because from the CSD an effort has been made and an offer has been launched for the parties to consider them, but by sensations we are as far away as this morning ", he added.

The manager explained that with the offer of 25,000 for the main referees, they would go from charging 300 euros "to 1,666 per game." "Little hope has been given to us that it will go ahead, I leave with the feeling of no," he pointed out, adding that the attendees would go from 168 euros to 1,066, "more than six times more", and being "sure" that for the rest of the expenses will be reached a quick agreement "if the issue of the fees is resolved".

"Yes, we have the feeling that we are being more flexible, but the other party will tell you the same thing. We have to know where we came from and where we are now and what was being offered in the arbitration receipt," said Vilches, who thanked to the CSD for their efforts and for being "fully involved". "From the resounding no we have passed to a proposal", he sentenced.

"I have feelings similar to those of yesterday, we continue adding and trying to reach an agreement and trying to be as flexible as possible," replied Yolanda Parga, who recognized "the support" that José Manuel Franco, president of the CSD, is giving them. , while he sees "more brakes" on the representatives of the F League. "Hopefully it can be unlocked," he wished.

Parga clarified that on the subject of salary, the 300 euros from past seasons was not because "it was not a professional category" and that these amounts "have to go up", and that the RFEF has decided to reduce 650,000 euros in refereeing expenses, "which is a lot of money".

"The current proposal is 25-16. I will explain how things are and we will see. The difference is really very minimal, but yesterday the position was very clear that it is not. It is a tense situation for everyone, but they they have to fight for their rights and we support them. The ones who must decide are they who are going to go out to the fields, we transfer the information to them in the most objective way possible, "concluded the head of Female Arbitration of the RFEF.