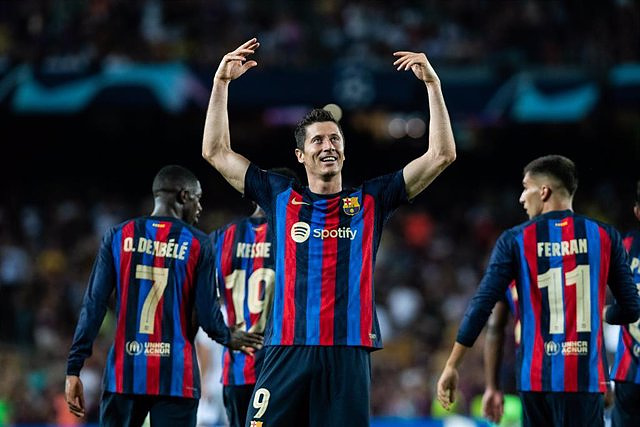 FC Barcelona kicked off its new Champions League campaign this Wednesday with a placid victory (5-1) against Viktoria Plzen, unable to maintain the blaugrana cruising speed, who reaffirms their promising league debut in Europe commanding goals of the Polish Robert Lewandowski.

The Czechs received a severe punishment with the Pole's first hat-trick, a goal from Ferran Torres and Franck Kessié, who started for the first time in an eleven that also featured Jordi Alba, relegated to the bench in recent games. Just like Pique. In his case, the center-back came out after the break to play his first official minutes of the season.

The anthem of the highest continental competition sounded again at a Camp Nou excited about his team. Gone is the debacle of recent seasons, and his banishment -unsuccessful- in the Europa League last year, and this time the joy permeates the 'culés', who continue to be sweet.

And it is that the Czech team soon fell into the trap of Xavi's men, who executed their plan to perfection and cornered their rivals from the start. After thirteen minutes, the Ivorian Franck Kessié was in charge of opening the can to reward Barça's insistence with an unstoppable header from the heart of the area.

The goal further intimidated a Plzen dislocated by the obvious local superiority. Ousmane Dembélé and Ansu Fati, who also debuted his first start in the Xavi era, were in charge of further breaking down a defense that withstood the offensive gale as best it could.

In one of the few respites for the visitors, Mosquera stood in Ter Stegen's goal and the VAR went from checking a possible penalty, in his favor, to admonishing the Colombian for elbowing Christensen before the possible penalty from the eleven meters

The cruising speed of the Catalan team seemed to prevail after half an hour of play with another goal from Robert Lewandowski, who opened the distance with the 2-0. The Pole, who has fallen squarely in Barcelona, ​​was once again differential on a night that would still reserve greater joy for him.

The Camp Nou continued to enjoy the gunpowder in their team's attack. However, the hosts paid for the relaxation in the final minutes of the first half with a header from Jan Sykora, who had no time to savor his achievement. Dembélé put on his overalls and served Lewandowski a cross, with which they repaired the damage suffered before the break.

After the restart, Sergi Roberto stayed on the bench and gave way to a testimonial Piqué to date. A meeting that had as a clear protagonist a huge Lewandowski from start to finish. The tireless striker, ready to draw blood, was completely unleashed with a shot to the far post that meant his third goal of the night and his first hat-trick.

The fans enjoyed themselves and Xavi took the opportunity to continue increasing the confidence of his players. Precisely, while the Camp Nou acclaimed their new hero, Ferran Torres saw the goal again and put the fifth volley in 71 '.

The ambition of the premises did not diminish despite the feast. They wanted more and that desire was evident among the less usual. Memphis Depay and Pablo Torre, who were more outside than inside in the last days of the market, enjoyed the ball again in the last minutes.

A placid first day of 'Champions' for the azulgranas, which allows them to continue from strength to strength both in LaLiga and in Europe. Now, in the continental competition, they will face Bayern Munich next Tuesday, who also did their homework in the group of 'death' against Inter Milan (0-2).