The negotiations between conservatives and progressives have been postponed until the visit of Reynders. 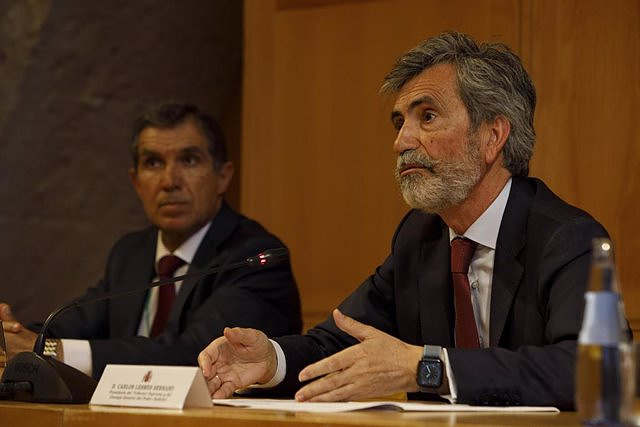 The president of the General Council of the Judiciary (CGPJ) and the Supreme Court (TS), Carlos Lesmes, has conveyed to several members his intention to convene a new plenary session on October 3 with the aim that they use it to appoint the two magistrates of the Constitutional Court (TC) that correspond to them, after the second round of negotiations failed this Wednesday.

The sources of the governing body of the judges consulted by Europa Press indicate, according to 'ABC', that Lesmes has informed some members that, if they do not take advantage of the ordinary plenary session already set for September 29, they could call another on October 3.

However, the same sources stress that the fact that an extraordinary plenary session is being held does not imply that an agreement will be reached because the key is still to arouse sufficient consensus between the two souls of the CGPJ --progressive and conservative-- to add the 12 votes that are needed of the 19 at stake.

In the Plenary session that took place on September 8, expressly called for these appointments to be made -although without success-, the members agreed that they would not all meet again until there were two clear candidates, something that still seems distant .

To this is added the warning issued by Lesmes a day before, during the opening of the judicial course, when he warned that he was willing to resign in "weeks" if the renewal of the CGPJ was not unlocked. Of course, he added that he would not leave until the appointments for the TC were on track.

This latest movement by the head of the Judiciary, marking a new date on the calendar, has occurred hours after the second meeting between the conservative and progressive interlocutors ended without agreement.

The negotiators of both sectors have confirmed "the firmest commitment to comply with the Council's own powers" to make such appointments, as well as their agreement "on the need to achieve large majorities" to appoint them.

However, the progressive wing has made it clear that there is "a difference in time" because they have proposed closing the agreement "in the shortest time possible", ahead of the plenary session on the 29th, but their conservative colleagues have replied that they do not believe that date can be reached.

The conservative side has argued that they still lack a list of candidates, because they assure that no Supreme Court magistrate has offered them to go to the TC, while the progressive members have already put nine names on the table, including that of Pablo Lucas, the judge in charge of controlling the CNI.

Despite this, the conservative members have been called internally for September 28, just before the Commissioner for Justice of the European Union, Didier Reynders, begins his two-day visit to Spain.

The aforementioned sources point out that the conservative current trusts that Reynders will manage to unclog the negotiations around the Judiciary. For example, with a global agreement that covers the renewals of both the CGPJ (which has expired for almost four years) and the TC, they specify.

Reynders himself said on Tuesday in statements to the press that during his stay in Spain he could not limit himself only to asking for dialogue between the political forces so that they agree on the renewal of the CGPJ but to get directly involved.

One of the concerns of the conservative current is the situation of collapse in which the TS would be left if the two magistrates chosen for the Constitutional Court leave the Supreme Court while the CGPJ continues to be unable to fill the vacancies generated in the judicial leadership.

Several rooms of the TS are already in a limit situation due to the legal reform promoted by the Government that since March 2021 prohibits an acting CGPJ – like the current one – from making discretionary appointments in the high courts.

The Executive promoted a second reform, approved last July, to return to the Council its capacity to make appointments but only to elect its two candidates for the Constitutional Court and to do so before September 13, a date passed that in reality from a good part of the CGPJ He always saw it as a guide.

The underlying problem is that on June 12 the mandate of the president of the TC, Pedro González-Trevijano, of the vice president Juan Antonio Xiol and of Antonio Narváez and Santiago Martínez-Vares, the four magistrates who make up the third that the Constitution commissions to renew, expired. a Government and CGPJ, with two each.

The Minister of Justice, Pilar Llop, assured last week that Moncloa, "logically", will wait for the CGPJ to have its two candidates to undertake the partial renewal of the TC, although she refused to specify how long she is willing to wait.