He criticizes that "who yesterday applauded the sentence that condemned his rival today discredits the one that affects him". 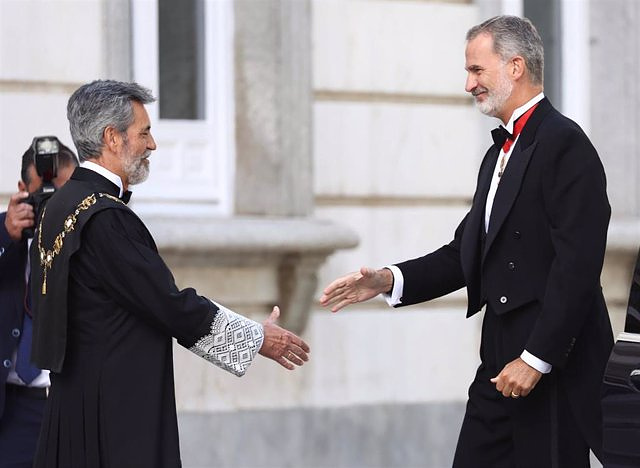 The president of the Supreme Court (TS) and the General Council of the Judiciary (CGPJ), Carlos Lesmes, charged this Wednesday against the measures aimed at "neutralizing" the sentences that "are not in accordance with the political interest of the moment", putting for example the "dejudicialization" of the 'procés', while at the same time he has warned of the "risk" that said "dejudicialization" ends up causing a "flight from the law".

This was stated in the opening act of the judicial year that took place this Wednesday at the TS before King Felipe VI and with the absence of the new State Attorney General, Álvaro García Ortiz, who has tested positive for COVID-19. This year is the fourth in a row that the meeting with the CGPJ in office is held and, on this occasion, marked by the negotiations to agree on the names of the two magistrates that the Council must appoint to the Constitutional Court (TC).

"Respect for the Law inevitably entails respect for the judicial decision, because only through it is the effectiveness of legal norms guaranteed. To understand it in another way is to consider the Law as mere opportunistic rhetoric that can be changed at convenience through the simple procedure of neutralizing through various procedures the judicial sentences that are not in accordance with the political interest of the moment", he said.

Lesmes has given as an example "that recent political speech that advocates, without further details, for 'dejudicialization', in reference to the events that occurred in Catalonia in 2017".

In this way, he has reproached that "there is no shame in talking about the need to flee from the judges who guarantee the application of the law as a formula for the peaceful and orderly solution of disputes, as if they were the ones who had caused the conflicts with their actions in defense of legality".

"There is a risk that if this announced dejudicialization materializes, what ends up being produced is a flight from the Law or, what is even more serious, from the principle of equality in the application of the law to all citizens, since no other consequence would have the triumph of the undisguised claim of impunity of certain categories of subjects against the rest of the citizens for the simple fact of their capacity for political influence", he added.

Lesmes recalled that "the value of the rule of law in our democracy not only requires recognition of the principle of separation of powers, the independence of judges and respect for their decisions", but that "it presupposes first of all the recognition of the primacy of the Right, to which all public powers and private persons must abide, since in democracies it is governed through laws.

"Neither is it lawful to oppose the democratic principle with the principle of legality, nor is it admissible for a public authority to invoke its democratic origin to break the law. This is the very essence of the rule of law," he stressed.

And this, he wanted to add, "without prejudice to admitting, and even weighing positively, that political action sometimes requires the adoption of exceptional measures to solve, or at least mitigate, some of the serious problems that afflict our Nation , especially those of a territorial nature".

When speaking of the 'procés, Lesmes has vindicated "the work of the Spanish judges and, very especially, for being in this seat, that of the magistrates and magistrates of the TS, in defense of the constitutional order and our democracy, guaranteeing the supremacy of laws and their enforcement.

DEFEND ALL SENTENCES FOR CORRUPTION

The head of the Judiciary has mentioned another "paradigm example" to "highlight the extraordinary service provided to Spanish society in recent years by absolutely independent judges in defense of our rule of law, who have never been willing to pay their robes to interests other than those of Justice".

This second example, he indicated, is "the fight waged against the phenomenon of corruption." Lesmes has pointed out the application of the law as "the most effective remedy", "maximum transparency is also necessary in all public actions to recover the citizen's confidence in the institutions".

"In this fight against corruption, Spanish judges have acted effectively, with full independence, without any guiding criteria or guidance other than those established by the Law itself," he stressed.

On this point, he emphasized that the judges and magistrates have acted in this way "without the critics interested in this field having succeeded in weakening our Justice or corroding the confidence of citizens in judicial institutions", and "despite the fact that it is not unusual that someone who yesterday applauded the sentence that condemned his rival today discredits the one that affects him, when it has often been handed down by the same magistrates".

Lesmes lamented that "these examples and many others that could be given have determined that the image that citizens have of the Judiciary has experienced a gradual and striking improvement in the last decade, according to demoscopic studies."

In particular, he has denounced that "the Spanish Justice is being subjected to tensions that can lead it to ineffectiveness and undermine the confidence that citizens have in it".

In this context, he stressed that "according to the Constitution, Spanish democracy is inextricably linked to the rule of law and this to the existence of an independent judiciary."