Laporta: "The enthusiasm for Lewandowski proves that there is a new splendid stage"

"We have done the work and we are confident that we will be able to register the signings". 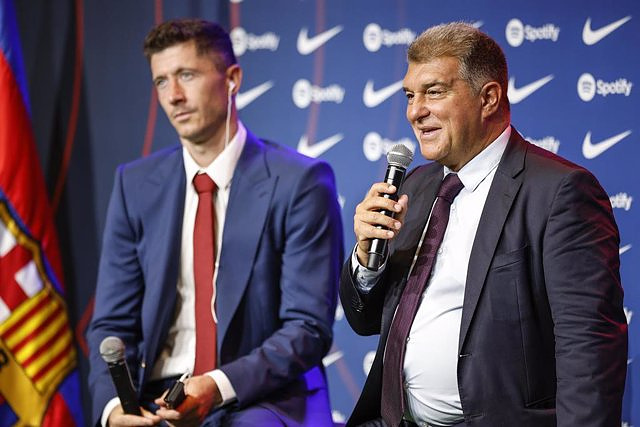 The president of FC Barcelona, ​​Joan Laporta, assured in Robert Lewandowski's presentation that the "enthusiasm" that the player has aroused in the fans is "further proof" that a "splendid" stage is beginning at the club, and added who trust in registering the signings after doing their homework at an economic level.

"You are a serious professional, who has charisma and ambition, an elegant and respectful person, and you earn people's respect. We have seen it at the Camp Nou, people were enthusiastic. It is further proof that there is a new stage I think it will be splendid and you are one of the references," he said at a press conference.

For Laporta, who denied being "untied" but agreed to be happier than usual, this is a "historic day" for the club. "It is a day that the 'culers' feel for the club more than ever and a sign that we are more than a club. Thank you Robert for the effort, it was not easy and we have achieved it, thanks to you and your agent, Pini Zahavi, and Mateu Alemany and Jordi Cruyff and the technical area", he thanked.

According to the president, they are working "hard" so that the club is once again "a reference in world football" and, at an economic level, he believes that they have room to register the striker and the rest of the signings; Christensen, Kessié, Koundé and Raphinha, in addition to Dembélé's new contract.

In addition, he acknowledged that the Board of Directors has given the green light to be able to activate a new economic lever, the fourth. "It is an operation that we had planned to do and if it serves, in case there are different interpretations, to consolidate the registration, the better. Barça has entered these last two months 868 million euros (counting the possible fourth lever), we have our own funds positive, we have a healthy balance sheet and the income statement, too. We have made profits this season", summarized Laporta.

"We have made a great effort, they have had to activate a series of operations with the sale of club assets but always in a controlled manner, and having the option of recovering those assets over time. It has worked very well, I am happy with how The club has worked. Work has been done to clean up the entity and have room to register the players who have come," he reiterated.

On the other hand, he explained why Lewandowski wears number '9', which belonged to Memphis Depay. "It was a club decision, for reasons that interest the club, image and publicity. It was an appropriate decision and it was made, with respect of course to Memphis and it was perfectly understood," he explained.

A pure '9' according to the president. "We had the intention of signing a scoring center forward. If a genius comes and asks us for three wishes, we would have wanted him to be a scorer, Golden Boot and with a goal guarantee, and that person is Robert Lewandowski," he described.

He also explained some details of the operation, and denied having bad relations with Bayern Munich after this signing. "I have a very nice personal relationship, as well as a professional one, with his agent (Pini Zahavi). I told him if there was an option and he said yes, that the player would like to play for Barça. We got in touch with Bayern and Mateu did an extraordinary job talking to them, always working with efficiency and discretion."

"When you have to negotiate the figures, Mateu moves like a fish in water. From the beginning there were several video calls with Robert, who was concerned about whether we could register him and I gave him comfort that it would be so, that if we could register one would be him, he was the first on the list. There were other clubs that offered more money, also to the player. For that you see me happy and also grateful. His agent promised me that one day Lewandowski would play for Barça, despite having offers from other clubs that were superior to what we could do. The player is here thanks to him and his agent," he said.

For Laporta, Lewandowski's will to be a 'culer' is a sign that he is on the right track. "We are proud that a player of the stature of Lewandowski has wanted to come. That is that we are on the right line. In my first stage they wanted to come to play because we had a star constellation. Now I value even more that those who have come wanted to come, for the prestige of the club, way of seeing football, for LaLiga which is attractive. And I'm not trying to make LaLiga understand it in another way, but for LaLiga having players like Lewandowski is very important", he commented, in a ' dardo' to Javier Tebas as a request to accept the Blaugrana numbers and the registration of the new '9'.

On the other hand, a year after Leo Messi said goodbye to the club when FC Barcelona was unable to offer the Argentine a new contract, Joan Laporta assured that the entity's economy is now healthier. "A year ago we had to announce an unwanted situation, as a result of the club's economic situation. But a year has passed and we can say that we are turning that bad situation around," he argued.

"We have to keep working, but Barça has left the hospital and we are getting healthier, but that shouldn't relax us and we have to keep working. We have withstood the pressure well, we continue to hold up well. that the club is on the right track and pick up that cruising speed that needs the stability and tranquility necessary to win titles again. It's what we're working for", he concluded.