Laporta: "Koundé showed his interest in coming and resisted" 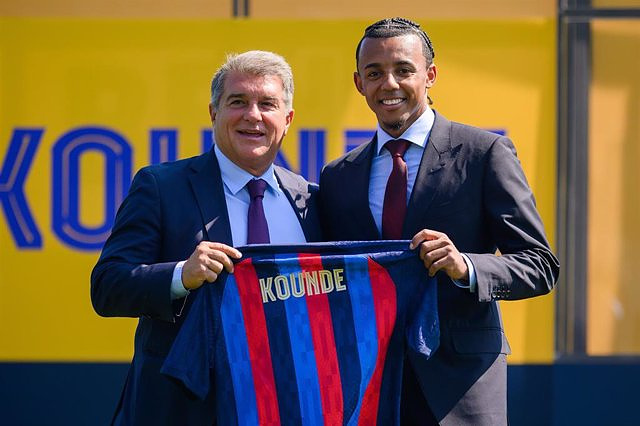 The president of FC Barcelona, ​​Joan Laporta, celebrated that Jules Koundé had the "resistance" to endure until the Blaugrana offer for him to Sevilla arrived and gave up listening to other offers, and assured that they are made with a "highly desired" signing.

"Koundé is a highly desired signing and I thank him very much for the effort made to come to Barça. We like the players who want to come to Barça because you like the project and you want to be successful. Welcome you, I know you have waited for Barça", stated in his presentation.

According to Laporta, they get a "high quality" central defender who was "highly desired" by the coach, Xavi Hernández, who was "insistent" on the incorporation. "We are very grateful at the club because the player has always shown his interest in coming to Barça and he has resisted," the president revealed.

For all these reasons, he believes that there is "optimism and confidence" in the club in terms of being able to register Koundé and the rest of the summer's signings. "We do what is necessary to be able to register them. You have seen it, these months the club has carried out a series of operations that allow us to comply with the regulations and I suppose that they did not hinder us from registering the players. I hope that our assessment is the same as that of LaLiga and, if not, we will talk about it and we will solve it", he valued.

"We have carried out the operations that we had to do to register the players, but the exits will also help. Work is being done on the exits, all this is not easy. I am confident that we will achieve the objective," Laporta assured in this regard after confirming the sale. 25 percent of Barça Studios to 'socios.com' for 100 million euros.

In addition, for the president, incorporating players of this quality is to "be satisfied." "I think they are doing very well. We'll see, the summer is long and we are willing to proceed with the registration and, once registered, we will see what happens. It may be that we do some more operations," he said after reviewing the arrival of Kessié, Christensen , Raphinha, Lewandowski, and Koundé.

"The feeling we have is that we are doing the job, with maximum difficulty because activating the levers has not been easy and the 'fair play' thing has its complexity. And the clubs against whom we competed in these operations took advantage of this situation. No I'm talking about other clubs, I'm talking about Barça. If they want to keep talking, let them talk. We're going ahead," he commented on the comments that may come from other clubs about the Blaugrana economic crisis.

Laporta stressed that they are focused on registering the players, on also resolving the exits of the players that the coach does not have, and not so much on looking at a market that is still open. "And then we'll see what to do if the coach asks us for more reinforcements. But now we focus on registering the signings," he concluded.