Lambán now qualifies his words about the leadership of the PSOE with Fernández: "Pedro Sánchez has all my loyalty" 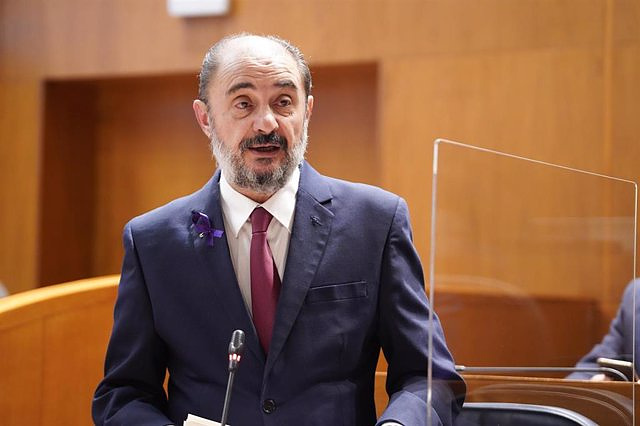 The president of Aragon, Javier Lambán, has qualified his statements in which he assured that Spain would have done "better" if the former Asturian president Javier Fernández had been the general secretary of the PSOE instead of Pedro Sánchez and has shown his "loyalty and support" to the current leader of the Socialists.

In this regard, Lambán has clarified that the "affinity and coincidence" that he maintains with Fernández "led him to ask him to lead the party when he resigned" Alfredo Pérez Rubalcaba, but he has asked that these words not be understood "as disloyalty" towards Pedro Sánchez . "Disagreeing on some things, he has my full loyalty and support," he noted in a message on Twitter.

In the act 'The State of the autonomies: balance and look at the future from the exercise of political responsibility', the President of Aragon has praised Fernández, who has also intervened, recalling his agreements to fight against depopulation.

Lambán regretted that when Alfredo Pérez Rubalcaba resigned --in 2014--, the former Asturian president refused to assume the general secretary of the federal PSOE: "This country would have done better if Javier had assumed that responsibility."

The Aragonese president has alluded to the Federal Committee of October 1, 2016, "a coven", in which "a merely nominal dilemma was not raised, but two different ways of understanding the way of governing Spain, political alliances", when Fernández led one option and Pedro Sánchez another, since the current president of the central government "understood that the association to govern with nationalists and independentists was admissible."

"The vision that Javier represented prevailed and led to the investiture of Rajoy", recalled Lambán, who stated: "When someone says that the pacts between the PP and PSOE with high vision are impossible, they forget that it was perfectly possible in that investiture and that this opened up a range of possibilities with Javier as president of the manager that could have given rise to very interesting dynamics".

However, "later the PSOE held some primaries, an evil invention where they exist, and that has given rise, together with the populist contamination that, in one way or another, we are all suffering, to which at this moment all the parties are whatever anything but democratic structures".

"Those primaries were won, overwhelmingly and legitimately, by Pedro Sánchez and, accepting that vote, at least in that political part of the party I feel in a minority, but it is something that in the history of the PSOE has happened on many occasions and it is something that I carry with the greatest possible dignity", he has settled.

‹ ›
Keywords:
Pedro SánchezPSOEJavier LambánJavier Fernández
Your comment has been forwarded to the administrator for approval.×
Warning! Will constitute a criminal offense, illegal, threatening, offensive, insulting and swearing, derogatory, defamatory, vulgar, pornographic, indecent, personality rights, damaging or similar nature in the nature of all kinds of financial content, legal, criminal and administrative responsibility for the content of the sender member / members are belong.
Related News