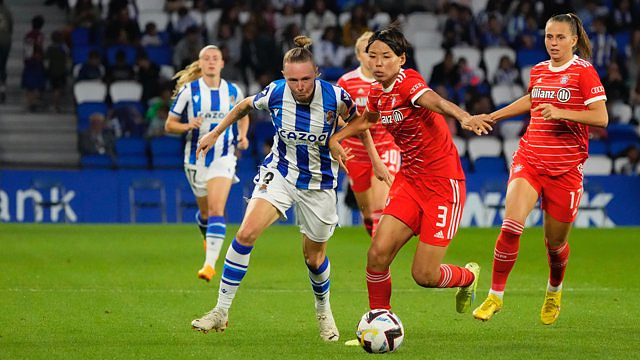 Real Sociedad complicated their access to the group stage of the 2022-2023 Women's Champions League after losing this Tuesday in the first leg of their 'playoff' by 0-1 against the powerful German Bayern Munich, a rival who imposed their trade and experience, although he also struggled, especially in the final half hour.

A goal just before half-time from Lea Schüller will force the 'txuri-urdin' team to look for a comeback in the Bavarian capital, something that doesn't seem impossible after a first chapter in which they were competitive and much more dangerous with the entry of Amaiur Sarriegi.

The debut in the top continental competition at the Reale Arena seemed to weigh a little more on Natalia Arroyo's team at the start of the match. La Real, with Amaiur Sarriegi again as a substitute as in the F League debut, could not find Nerea Eizagirre and Bayern started better, although they did not create too much danger on Lete Para's goal beyond a tight foul by Simon and one centered from Stanway.

Little by little, and as soon as their captain came into play more, the royalists took the pulse of the clash and were able to launch an initial warning with a combination between Gemma Gili and Eizagirre, whose back pass did not find a finisher.

The final stretch of the first half was above all more for the visitors, who had very good chances. Dallman, one of the best, ran into the post, and Schüller enjoyed two, not forgiving in the third after a great pass from Buhl. La Real also had a good option before the 0-1 draw after a good play by Bernabé, but Gaby's shot went close to the post.

After the break, Real Sociedad came out willing to control and be more aggressive, an ambition that could cost them the tie because, with space, Bayern forgave. Gwinn, at an empty goal, missed his shot and shortly afterwards Lete Para emerged as the savior with a point-blank save on Schüller and then feline reflexes to prevent an opponent from pushing the loose ball.

Natalia Arroyo then decided to move her bench and brought in Amaiur Sarriegi, who made the local attack much more dynamic and caused the final half hour to be more of suffering for the German team. Nerea Eizagirre saw how her shot, slightly deflected by Grohs, crashed into the crossbar, and the captain returned to give a serious warning minutes later.

Viggosdottir crossed quickly to avoid Sarriegi's one-on-one, and Specht did the same in one of Bayern's final runs, who could also make it 2-0 through Rall. The last of the game, very clearly, was from Real, but Amaiur Sarriegi was not right with his shot and his team will have to look for the ticket in Munich.

‹ ›
Keywords:
Champions LeagueReal SociedadMujer Y Deporte
Your comment has been forwarded to the administrator for approval.×
Warning! Will constitute a criminal offense, illegal, threatening, offensive, insulting and swearing, derogatory, defamatory, vulgar, pornographic, indecent, personality rights, damaging or similar nature in the nature of all kinds of financial content, legal, criminal and administrative responsibility for the content of the sender member / members are belong.
Related News