Koundé: "Piqué is a very competitive person and he is very important for the group" 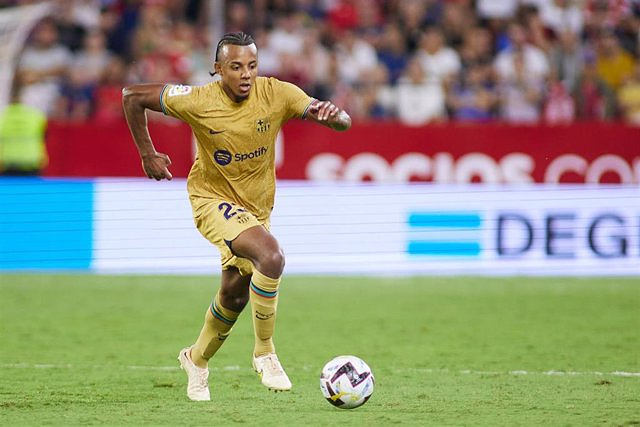 The French defender of FC Barcelona, ​​Jules Koundé, warned that Gerard Piqué will have opportunities to play this season because he is "very competitive" and stressed that his figure is "very important" for a group that faces the Champions League with enthusiasm where it is clear that they also have "a lot of danger" for Bayern Munich and Inter Milan.

"I think he is a very competitive person and throughout the season he will surely play. He is very important in the locker room, he gives advice and his experience and his career speak for themselves. He helps us a lot to those of us who have just signed and to those who follow , is very important in the group", stressed Koundé at a press conference.

The defender stressed that he is "well", although he knows that "there are still concepts" of Xavi Hernández that he must "learn and improve". "I feel comfortable with the style that the coach wants and with my teammates. The full-back position doesn't bother me, but everyone knows that I'm a central defender and that I prefer to play as a central defender, but I'm going to try to do my best as a full-back to fulfill ", he indicated.

In this sense, the international pointed out that it is "feasible" that he return to his most usual position due to the signing of Héctor Bellerín, who "plays on the side and is one more solution for the coach", and assured that he was not "surprised" by the performance that Eric García and Ronald Araújo are giving. "I knew they had a lot of quality. They are doing a very good job and we get along very well, it is always good to have competition," he admitted.

At the moment, FC Barcelona has only conceded one goal, which has been "due to everyone's work". "We're doing the pressure very well when we lose the ball. It's a good sign, everyone has a good attitude and if we continue like this we'll get a lot of points because not conceding is key to a successful season," said the Frenchman.

Koundé confessed that he took "calmly and with full confidence" his delay in being registered. "I knew they were going to do it and it was something that was out of my hands and I concentrated on training well, recovering sensations and preparing myself because at one point I was going to play and I had to be prepared", he stressed.

"Barça is one of the biggest clubs, it has always generated enthusiasm and within its economic circumstances it continues to do so. Talking with the coach was important, he gave me a lot of confidence and I liked his way of seeing football. Coming was a decision." easy' because it was what I was looking for", he added about his signing despite the uncertainties about the Catalan team.

Xavi is asking for "some different concepts" from what he did at Sevilla, where he also had "freedom to go up." "I like to contribute and be important in position play and in attack. Every time I can, I have to split to provide superiority and defensively, be very aggressive and play high, without fear of going under pressure and leading the team because the Communication is very important, especially in my position", he considered.

"The first thing for me is the collective and in each competition my collective ambition is to win it. With any title I will be happy, but personally I want to continue progressing because I have a lot of margin and I also want to go to the World Cup", remarked Koundé, to whom he did not like The level of his team has "surprised" because it already had "very talented players in each line" and that now with the new signings "it has been reinforced with two or three high-level players per position".

Now, ahead of their debut in the Champions League, he sees the team "very excited" to play "a wonderful competition that everyone wants to play and win". "We have to start in the best way to win this first game and everyone is very focused," said the defender.

"I think that when you enter a competition it is to win it, especially when you are at Barça. The group has a significant margin of progression, with many additions and the coach is putting his ideas in, so we have many things to improve, but we have a large squad and we go with the intention of competing very well", continued the former Sevilla player.

The Frenchman does not forget that they will have "a very competitive and difficult group" in the Champions League, "with very good teams." "I'm very excited because I play to enjoy these big games and we're in a lot of danger too and the teams see how our squad is doing and they should take us seriously. We think we have many options to get through", he pointed out.

‹ ›
Keywords:
Champions LeagueFútbol Club BarcelonaGerard Piqué
Your comment has been forwarded to the administrator for approval.×
Warning! Will constitute a criminal offense, illegal, threatening, offensive, insulting and swearing, derogatory, defamatory, vulgar, pornographic, indecent, personality rights, damaging or similar nature in the nature of all kinds of financial content, legal, criminal and administrative responsibility for the content of the sender member / members are belong.
Related News