The Prime Minister of Kosovo, Albin Kurti, announced this Monday morning, after the increase in tensions with Serbia, his decision to postpone for a month the implementation of the two measures that came into force this Monday, August 1 and that affected people entering the country from Serbia. 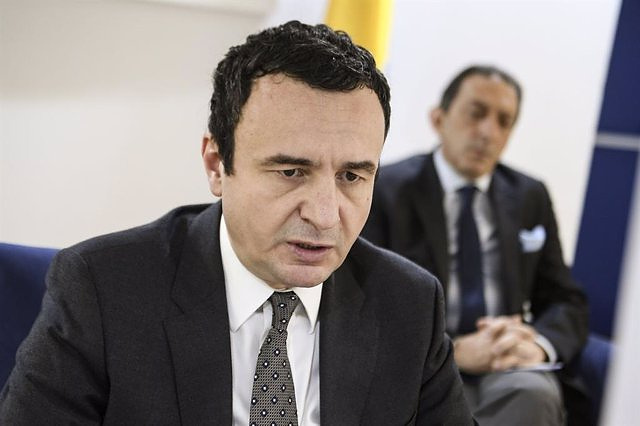 The Prime Minister of Kosovo, Albin Kurti, announced this Monday morning, after the increase in tensions with Serbia, his decision to postpone for a month the implementation of the two measures that came into force this Monday, August 1 and that affected people entering the country from Serbia.

"Prime Minister Kurti, together with President Osmani and Deputy Prime Ministers Bislimi and Gervalla have developed contacts and meetings with American and European international factors. On this occasion, the Government of Kosovo is committed to postponing the implementation of the two decisions until September 1, 2022", the country's Presidency expressed in a statement, according to 'Bota Sot'.

This Monday a Kosovar law came into force by which people from Serbia who entered Kosovo had to hand over their identity documents, which would be replaced by documents issued by Pristina.

In addition, car license plates issued by Serbia for Kosovar cities with a Serb majority population were to be replaced by official Kosovo ones.

However, despite the fact that the Government of Kosovo has withdrawn from immediately establishing the measure, it has announced that the decision to postpone it is conditional on the removal of the barricades that the Serbs in the north of Kosovo have established at two border crossings that communicate the region with Serbia, thus cutting off the path.

"When all barricades and obstacles are removed, this decision will be suspended until September 1, 2022," Kosovo Interior Minister Xhelal Sveçla said in a Facebook post, stressing the importance of guaranteeing freedom of expression. movement of citizens and goods, according to the radio station Radio Free Europe.

In addition, the Kosovar Executive has "strongly" condemned the road blockade that took place this Sunday in the north of the country, as well as "the shooting of armed people against illegal structures there".

"This is about the tendency to destabilize Kosovo and endanger the peace and security of citizens and our country. There have been numerous acts of aggression in the afternoon and evening, incited and prepared by Belgrade," the Government has maintained in the writing.

Minutes before holding a meeting with the prime minister of Kosovo, the US ambassador to the country, Jeffey Hovenier, asked the Kosovo government to postpone the implementation of the decisions for 30 days.

"I am here to request a 30-day postponement of the implementation of these two decisions on behalf of the American Government. We believe such a postponement would be important because there appears to be misinformation and misunderstanding about these decisions. We look forward to working with this Government and Union colleagues." Union," Hovenier said, according to Radio Free Europe.

For his part, the High Representative of the European Union for Foreign Affairs and Security Policy, Josep Borrell, has welcomed Kosovo's decision to postpone the measures until September 1, and has stated that he hopes that "immediately all obstacles."

"Pending issues must be addressed through a dialogue facilitated by the European Union and focus on the complete normalization of relations between Kosovo and Serbia, essential for their integration into the Union," Borrell detailed on his Twitter account.

The special representative of the secretary general of the United Nations Interim Administration Mission in Kosovo, Caroline Ziadeh, has shown her concern about the events in the north of Kosovo.

"I urge everyone to address the issues in good faith through dialogue facilitated by the European Union, so as to strengthen stability and security for all," he added in a statement.

From Serbia, the country's president, Aleksandar Vucic, has assured after a meeting with the Serbian General Staff that "good news" is expected, and has urged the citizens of Serbia not to "fall into provocation" and not to do anything that can lead to any kind of conflict.

"That is my great request. All I can say is that we pray for peace. I can say that there will be no surrender and Serbia will win. If they dare to mistreat Serbs, kill them, persecute them, Serbia will win," Vucic said in statements collected by 'Politika'.

"I want to address our people in Kosovo in particular and thank them for holding out with restraint, for not being afraid. Also those who have supported Serbia and have been right to express their views. Many thanks to Borrell and the representatives of the Embassy American," he added.

The NATO Force for Kosovo (KFOR) announced this Sunday at the last minute that "it is prepared to intervene" in the event that the stability of northern Kosovo is endangered, after Serbs from northern Kosovo have cut two border crossings that connect the region with Serbia.

"KFOR will take all necessary measures to maintain a secure environment in Kosovo at all times, in accordance with its UN mandate," he said in a statement on his Twitter account, after the rise in tensions in the north. of Kosovo registered in the last hours.

The conflict between the two sides began in September 2021, when Kosovo ordered all drivers entering the country from Serbia to use temporary license plates valid for 60 days, a measure that was already in place for drivers entering Serbia from Kosovo. since 2008.

Five EU countries, including Spain, do not recognize the Kosovar unilateral declaration of independence in 2008. The EU, however, acts as a mediator in the negotiations between Belgrade and Pristina, on which the general normalization of relations and the possibilities of accession of both countries to the community bloc.

The EU's diplomatic initiative, which reactivated the dialogue process in 2020, seeks for the two parties to normalize their relations in binding terms and in accordance with international standards, something that it considers a 'sine qua non' condition for the European path.