Koke: "When we come to Spain we are all teammates" 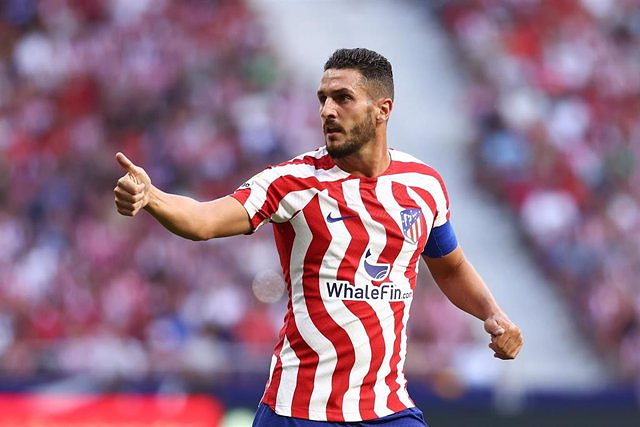 The Atlético de Madrid international Jorge 'Koke' Resurrección affirmed that when he is concentrated with the Spanish team all the players are "companions", alluding to the tension with which the derby (1-2) of LaLiga Santander was played in the past Sunday against Real Madrid at the Cívitas Metropolitano.

"When we come to the national team we are all teammates. What you have done with your club you have to leave behind. We have the same relationship as groupmates and we look out for the national team. For us now it is important to qualify for the 'final four'. They are two games that are going to demand a lot from us," he said at a press conference.

Koke Resurección and the FC Barcelona international Pedri participated in the presentation of the agreement between the RFEF and the company Tetra Pak until 2024, in an event that was also attended by José Luis Velilla, Director of Marketing for Iberia at Tetra Pak; and the Marketing Director of the RFEF, Rubén Rivera, at the Ciudad del Fútbol in Las Rozas (Madrid).

Koke pointed out that the last two matches of the group stage of the League of Nations against Switzerland in Zaragoza and Portugal in Braga will give them "one more plus" for the preparation for the World Cup at the end of this 2022 in Qatar, although, according to him, "a lot remains." "Now we are trying to qualify for a competition that we were about to win last time. Qualifying for the 'final four' would give us a lot of confidence for what is to come", he confessed.

The mattress midfielder recalled that his philosophy is similar to that of his coach at Atlético, Diego Pablo Simeone. "I've always had that philosophy which is to live day by day. It doesn't matter what happens in two months. If I'm lucky enough to be in the World Cup, being world champion is one of my biggest challenges. death with the Swiss party", he differentiated.

To stop Portugal and his teammate Joao Félix, the objective will be to "take the ball from him". "One of our keys is to have the ball. If we are precise it is one of the keys to be able to defend Joao. Relief for the weather at Atlético? I love coming with the national team, it is a pride. Relief, no, pride. Being with the players of the national team makes me learn," he stressed.

For his part, Pedri said that "everyone sees the goals scored" by Polish striker Robert Lewandowski, one of the most prominent in the good start of the season for Xavi Hernández's team. "He gives us a lot of things. I hope he continues like this, it's an honor to play with him," said the Blaugrana midfielder.

For Pedri it is "proud" to have been summoned by Luis Enrique, although it is not the definitive list for Qatar 2022. "They are two important games and we want to reach the 'final four'. For me coming to the national team is enjoying and learning from the best," he said.

‹ ›
Keywords:
Real MadridAtlético De Madrid
Your comment has been forwarded to the administrator for approval.×
Warning! Will constitute a criminal offense, illegal, threatening, offensive, insulting and swearing, derogatory, defamatory, vulgar, pornographic, indecent, personality rights, damaging or similar nature in the nature of all kinds of financial content, legal, criminal and administrative responsibility for the content of the sender member / members are belong.
Related News