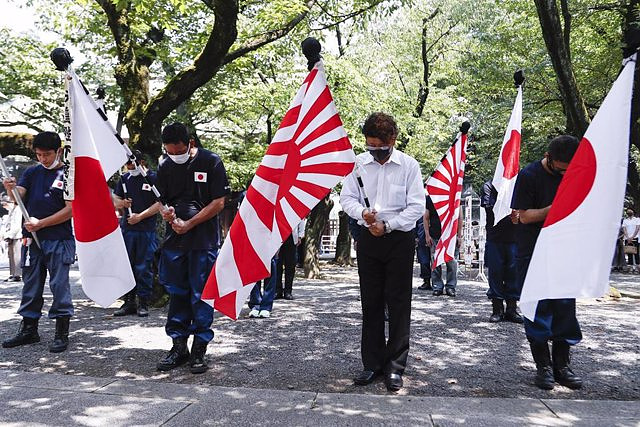 Japanese Prime Minister Fumio Kishida sent a donation to the Yasukuni Shrine on Monday, where the remains of 2.5 million soldiers are buried, including some of those responsible for serious crimes committed by the Japanese Empire in Asia, which that has stirred up neighboring countries.

This August 15, Japan remembers the day of the surrender of Japan, which ended World War II in the Pacific, for which Kishida has sent a donation to the Shinto shrine as leader of the Liberal Democratic Party, according to Japanese public television. NHK.

Although Kishida has not visited the temple, Economic Security Minister Sanae Takaichi and Reconstruction Minister Kenya Akiba have.

This is the third year in a row that Japanese government ministers have visited the Yasukuni shrine on August 15. Economy, Trade and Industry Minister Yasutoshi Nishimura visited the temple last Saturday.

After the visit, the spokesman for the Chinese Ministry of Foreign Affairs, Hua Chunying, recalled that the remains of 14 class A war criminals rest in the Yasukuni Shrine, which is why it is "a symbol of the militaristic war of aggression of Japan".

For this reason, it considers that this donation and the visit of ministers of the Japanese Government "represent an affront to historical justice and seriously damage the feelings of the Asian victim countries, including China" and have transferred their formal complaint through diplomatic channels to Tokyo.

Meanwhile, Seoul has expressed its "deep disappointment" for these honors in Yasukuni and has called on the Japanese authorities to "face history and show humility and introspection" with its history.

‹ ›
Keywords:
ChinaJapónCorea Del SurAsia
Your comment has been forwarded to the administrator for approval.×
Warning! Will constitute a criminal offense, illegal, threatening, offensive, insulting and swearing, derogatory, defamatory, vulgar, pornographic, indecent, personality rights, damaging or similar nature in the nature of all kinds of financial content, legal, criminal and administrative responsibility for the content of the sender member / members are belong.
Related News