He achieved a Europa League title, the club's record for points in LaLiga Santander and three consecutive qualifications for the 'Champions'. 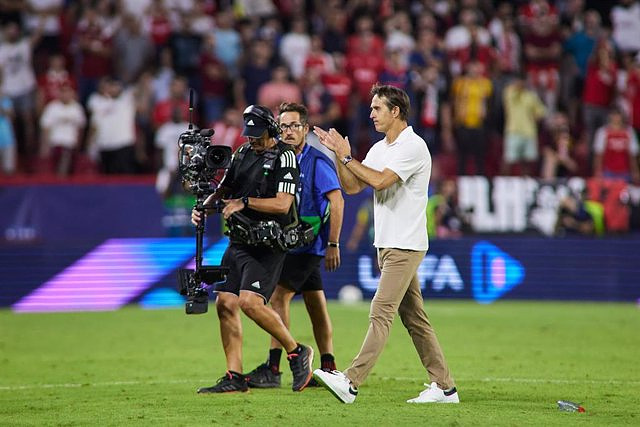 He achieved a Europa League title, the club's record for points in LaLiga Santander and three consecutive qualifications for the 'Champions'

Coach Julen Lopetegui has ceased to be Sevilla's coach after the defeat (1-4) against Borussia Dortmund on matchday three of the Champions League, played at the Ramón Sánchez Pizjuán and due to the poor start in LaLiga Santander, reported the Seville club in a statement.

"Sevilla FC has dismissed Julen Lopetegui as coach of the first team once the match between the Nervión team and Borussia Dortmund on Wednesday ended. Lopetegui closes a successful stage with three magnificent campaigns in which they achieved more than the objectives and a fourth season in which, however, the results have not been on track, with Sevilla FC adding five points out of a possible 21 in LaLiga", the Seville club stated in the public note.

Lopetegui has managed Sevilla in 170 games: 121 games in LaLiga Santander, 15 in the Cup, 16 in the Europa League, 17 in the Champions League and one in the European Super Cup, which makes him the fifth coach with the most games in the history of the Seville club after Joaquín Caparrós, Unai Emery, Manolo Cardo and Ramón Encinas.

In the 2019-20 season, he won the entity's sixth Europa League, has achieved three consecutive qualifications for the Champions League and the scoring record, with 77, in the 2020-21 academic year, just as Yassine Bono won the first Zamora Trophy last season.