Judicial associations criticize the "childish and absurd" reaction of Equality: "It is not worth calling judges macho"

They remember that the CGPJ warned about the downward revision of sentences and they attribute it to a "lack of foresight by the legislator". 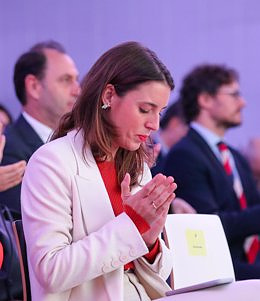 The four associations of judges have shown their indignation at the "childish and absurd" reaction of the Minister for Equality, Irene Montero, who has assured this Wednesday that machismo "can cause" magistrates to "apply erroneously or defectively". the well-known law of 'only yes is yes'.

"When you legislate without paying attention to what is reported by the bodies that have an obligation to notify you, you run the risk of this type of thing happening. Now it is not worth calling judges sexist. It is childish and absurd," said the executive member of the Professional Association of the Magistracy (APM) Juan José Carbonero in statements to Europa Press.

In his opinion, it is not an "improper application of the law by a judge" in isolation. "The magistrates apply the law as they have to, to the extent that retroactivity cannot be stopped from being applied. The General Council of the Judiciary warned them and nobody paid attention to them," he explained.

The APM magistrate has referred in this way to the report issued in February 2021 by the governing body of judges on the current Law to Guarantee Sexual Freedom, which at that time was a preliminary draft. In it, the CGPJ explained that the penological table contemplated for the crimes of sexual assaults supposed "a reduction of the maximum limit of some penalties."

Carbonero recalled that, although the "reports are not binding, a responsible legislator must pay attention to their content". "We put our hands on our heads, but when you run, you run. And there is a risk that certain types of things do not go as well as they should," he warned, in relation to the haste with which he got ahead the new law.

In his opinion, everything is reduced to a "question of good legislative technique", for which he has questioned what he considers an erratic strategy from Equality. "It's smoke when talking about sexist judges and the reality is unknown. It makes no sense to label those of us who are going to apply the law when the result is not wanted as sexist. It is dangerous to enter a spiral of this nature," he has settled.

The spokesman for the Francisco de Vitoria Judicial Association (AJFV), Jorge Fernández Vaquero, has expressed himself in a similar vein, explaining that "the fact that" the law is applied "does not have to alarm anyone." "Different is that" the reduction of sentences, he has pointed out, "was not an expected or desired consequence."

"Then we have a problem of lack of foresight by the legislator. I understand that it may attract attention, but it really happens when the Penal Code is changed and certain behaviors are decriminalized or the sentence is reduced for a crime," Vaquero has tied.

However, the AJFV spokesman explained that "the way in which the law is applied now" does not have to be "definitive", as long as "the jurisprudence can change". "It is not necessary to give as if they were the stones of the law. It seems true that it is something that could be thought by how the law had been that could happen. It is the law that exists, it is not a surprise, if they have not foreseen it It is a problem that now has no solution", he added.

Vaquero has also warned about a hypothetical modification of the law, an option that was opened this Tuesday by the Minister of Finance and Government spokesperson, María Jesús Montero. "Even if the law were to change, everyone would benefit. A change would only apply to those who commit crimes from the entry into force of the change. It is applied retroactively to all those who were convicted, even if it is in force for only one day," he said. pointed her.

For her part, magistrate Concha Roig, a member of the secretariat of Judges for Democracy (JJpD), has acknowledged that she has been surprised that there has been "a surprise" by the reduction in prison sentences for those convicted of sexual abuse to minors considering that the reform of the Penal Code is more favorable to the prisoner.

"It is a normal application since the approval of the Penal Code of 1995. There is no room for judicial discretion, it is not about re-determining the sentence and interpreting the facts: it is an exhaustive interpretation," he said in statements to this news agency .

Roig explained that this reduction in sentences can be justified by the fact that what could happen at the time the law was drafted was not "taken into account". "The only way to have avoided it would have been if the sentences had not been modified, but that is criminal policy. I am surprised that it was a surprise," he insisted.

The president of the Independent Judicial Forum (FJI) has shown in statements to Europa Press his indignation at an "exaggerated, disproportionate and demagogic reaction on the part of political leaders, who put the ball on the roof of the judicial building" which, in his opinion , "they have assembled themselves".

"It is not an interpretative problem, but in the law where it said 8 now it says 6. That now they say that we break the law when we are complying with the truth that sounds like what it is. The disqualification and insult is the argument of those who do not they have arguments. Such a visceral reaction and a flight forward shows that they want to kill the messenger," he lamented.

In this line, Portillo has made clear what is from his point of view the origin of the controversy: "A false expectation has been created with this law. It is the problem of legislating from demagogy." Thus, the magistrate has criticized the attempt to "sell a law as something that it is not and then surprise you because it is being applied."

In his opinion, the political leaders "counted that" these results could occur, "but they did not give it enough importance" until now, when the "public repercussion against the message they defend" has surfaced. "And there will continue to be acquittals and reviews, because it is normal operation," he concluded.

‹ ›
Keywords:
Violencia De GéneroIrene Montero
Your comment has been forwarded to the administrator for approval.×
Warning! Will constitute a criminal offense, illegal, threatening, offensive, insulting and swearing, derogatory, defamatory, vulgar, pornographic, indecent, personality rights, damaging or similar nature in the nature of all kinds of financial content, legal, criminal and administrative responsibility for the content of the sender member / members are belong.
Related News