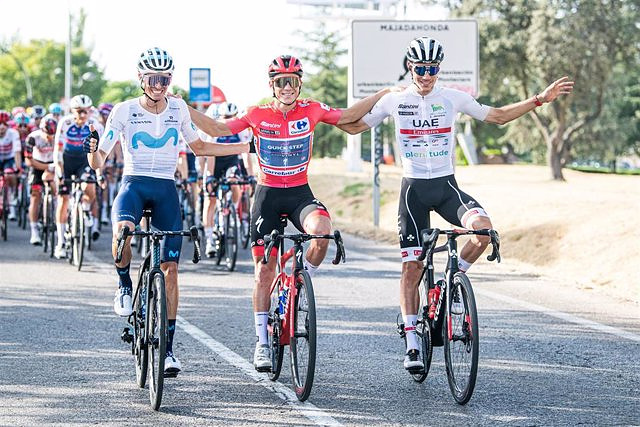 The Spanish rider Juan Ayuso (UAE Team Emirates), third in La Vuelta a España, will lead the national team in the Road Cycling World Championships, which will take place from September 18 to 25 in Wollongong (Australia), as announced this Monday the Royal Spanish Cycling Federation (RFEC).

The national team will face the online test on September 25 with a team made up of Juan Ayuso, Marc Soler, Urko Berrade, Roger Adriá, Jesús Ezquerra, Eduard Prades, Gotzon Martín and Oier Lazkano.

The first and the last day of competition are reserved for the elite men's time trial and the online test of this same category. The national coach, Pascual Momparler, has summoned this 'eight' and Oier Lazkano will also play the individual time trial.

"We go to this World Championship with great enthusiasm and hope after the impressive performance that Juan Ayuso has completed in the Vuelta a España. We will have to see how he recovers from the effort that three weeks at the highest level entail at the age of 19, but he is a rider with all the skills to shine in a race like the World Championship. In addition, Marc Soler has also had a sensational Vuelta and is eager to do well in Australia. I have worked from lower categories with practically all the cyclists called and I have full confidence that the The Spanish team will be able to do a good job as a team and complete a prominent role in this World Cup," said Pascual Momparler.

In addition, the Spanish team will also be present in the mixed team time trial, on Wednesday, September 21, with a male relay made up of Raúl García Pierna, Oier Lazkano and Iván Romeo, while the female team will be made up of Lourdes Oyarbide, Sandra Alonso and Idoia Eraso.

‹ ›
Keywords:
Díaz AyusoEmirates
Your comment has been forwarded to the administrator for approval.×
Warning! Will constitute a criminal offense, illegal, threatening, offensive, insulting and swearing, derogatory, defamatory, vulgar, pornographic, indecent, personality rights, damaging or similar nature in the nature of all kinds of financial content, legal, criminal and administrative responsibility for the content of the sender member / members are belong.
Related News