José Manuel Calderón: "There will be better teams, but they will suffer a lot to beat Spain"

About Lorenzo Brown: "The key is that he gives his best for the shirt, I see him as one more". 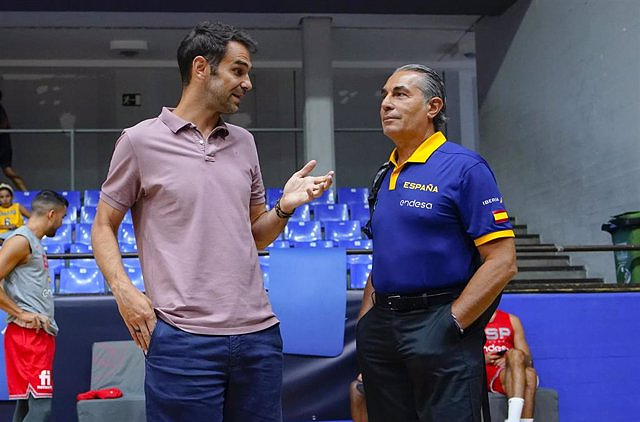 About Lorenzo Brown: "The key is that he gives his best for the shirt, I see him as one more"

Former basketball player José Manuel Calderón assured this Wednesday that the Spanish team is "capable of beating anyone in any situation", adding that the teams "are going to suffer a lot to beat Spain", where he pointed out that the adaptation process to the younger ones is "very easy".

"We must demand that they fight to the maximum in each game and compete until the end. There is a formula that when you wear this shirt you know that Spain is going to compete and play in a way, as a team. We are capable of beating anyone in any situation, It's what can be expected. There will be teams that could be better, but whoever is going to suffer a lot to beat Spain," Calderón said after his visit to the team's concentration camp in Madrid to prepare for Eurobasket 2022.

The one who was a base in the Spanish team that was proclaimed champion of the world in 2006 and of Europe in 2011, valued the "values ​​and way of working" of the national team, which make you "be calm" before big tournaments, such as the Eurobasket that will begin this September 1. "I see the group very well. For many it is a dream, others have been there for many years... It is the feeling of being at home and at ease no matter how long you have been," he said after watching the training session in Magariños.

"The team is starting to roll and take on that mentality of an important championship, it's nice to see this mixture of youth with experience, people in the middle of the two things, it's interesting", he added about that renewal process that the team led by Serge Scariolo.

For Calderón, who played 193 games with the national team until his retirement after the Rio Games -with bronze for Spain-, the legacy of 'La Familia' is to have transmitted the same way of playing from generation to generation. "It doesn't matter who is there, there is a way to compete. The other teams know that Spain will play well, no matter who is there, that's the key. They are the ingredients that we always have, now we have to show it on the court, without fearing anyone nor despise anyone," he explained.

"It doesn't matter how long you've been, you're one more, it's easy, they instill in you those values ​​and way of working, that makes everyone calm. It's very easy to get into this group dynamic, it seems like you've been around for years, that has made that adaptation very easy, more than anywhere else," he added.

Finally, he addressed the situation of Lorenzo Brown, nationalized about a month ago and present in the current call to prepare for the Eurobasket with Spain. "He is a great player, eager to help, collaborate and adapt. Those who have arrived new are people who are learning from the first day, like at home. The key is that they give the maximum for the shirt, I see him as one more ", he concluded on the basis of Maccabi.