Jordi Alba: If Barça can't sign, then they will have to pull from the quarry"

"Gavi is a different player and he has to improve in many aspects, like everyone else". 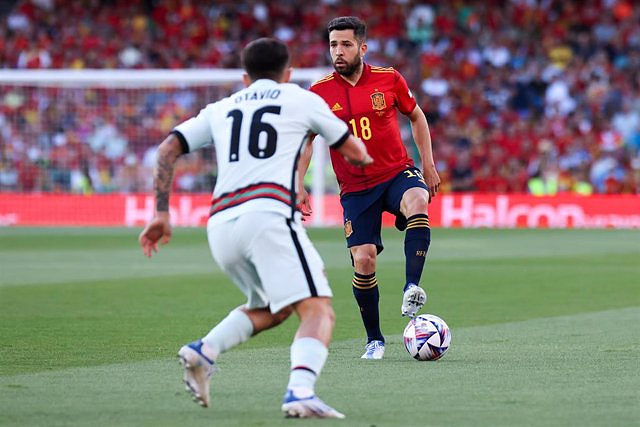 "Gavi is a different player and he has to improve in many aspects, like everyone else"

The player of the Spanish team Jordi Alba recognized the delicate economic situation of FC Barcelona and the commitment of the four captains, although for the side if "they cannot sign" the solution goes through the Barça youth academy.

"The situation we are in will not always be rosy. If we cannot sign, then we have to pull from the quarry, there are very good players too. That is the idea that the club has or should take," he said in the press conference prior to the League of Nations match against the Czech Republic.

Asked about a possible salary reduction, he reiterated the commitment of the captains, which they do not have to doubt. "We are from the house and we know the difficulty of the club. The four captains will be there to help. We have always been committed and we continue to be," he settled.

Among them is the name of Sergi Roberto, renewed on Friday until 2023. "It is a pleasure to have him for another year because he works a lot. He is not a showy player, but he is necessary in a team," he said about it.

Regarding his teammate in the national team and FC Barcelona, ​​Gavi, the defender assured that he is a "different" player and that he has to improve in "many aspects", but "like everyone else". In this sense, the one from Hospitalet admitted that at 33 years old "sure" that he also has things to learn.

"I see Gavi as outstanding for his age and he has just started. He has a claw and does things that I have seen very few. A self-confidence when it comes to living with his teammates that helps him play on the field. We are delighted with him," he said of the 17-year-old.

Another of the key players for the national team and for the 'culé' team is Ansu Fati, who has gone through a difficult season. "He still has it left. At first you are very afraid of sprinting and with injuries it is not easy to jump in and be on everyone's line," added his teammate about the striker, of whom he has no doubt that he will return "more strong".

"THE PEOPLE HAVE BELIEVED IN THE SELECTION AGAIN"

Jordi Alba highlighted that the fans "have once again believed in the national team" thanks to Luis Enrique's role as coach, since his arrival in 2018, and the level shown in the European Championship when he fell in the semifinals.

"Since Luis Enrique has been here, he has given confidence to many players, not only in my position. I was a long time without coming and in the end the coach does not marry anyone, he will bring those he considers to be better. I like the rivalry within the team, it's good for everyone", he recognised.

About the Czech Republic, his rival this Sunday in the UEFA Nations League, the Catalan recalled the difficulty in the balls to the back that they suffered a week ago against the same opponent, in the 2-2 draw. "We expect the same match. It will be a difficult match and we hope it goes well. We play in our field", he concluded about the match that will be played at La Rosaleda.