He says Truss and his "compassionate Conservative government" will do "everything they can to get people out of this crisis. 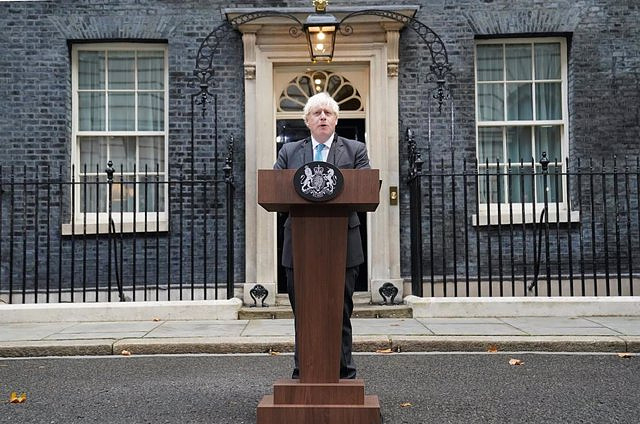 He says Truss and his "compassionate Conservative government" will do "everything they can to get people out of this crisis."

The outgoing Prime Minister of the United Kingdom, Boris Johnson, has highlighted this Tuesday in his last speech before leaving office that he will give his "fervent support" to Liz Truss, who will replace him in office, and has stressed that "it is time to stand behind Liz Truss and her program" in the face of the difficulties that the European country is going through.

"This is all, friends," Johnson said at the beginning of his speech, given a few hours after moving to Balmoral to meet with Queen Elizabeth II to hand in his resignation and "pass the baton to a new leader of the Conservative Party" after " which unexpectedly turned into a relay race" in which "the rules were changed midway".

"He will offer this government nothing but the most fervent support," he stressed, before stressing that "it is a tough time for the economy and a tough time for families across the country." "We can get through it and we will get through it," said Johnson, who has asked the 'Tories' to "end politics" and support Truss to "give answers to the population of the country."

Thus, he has emphasized that "this is what the people want, what they need and what they deserve", while highlighting his work at the head of the Government, including "the largest majority since 1987 and the highest percentage of vote since 1979", as well as "materialize Brexit", "help people in the country", "guarantee the weight of the United Kingdom in the world" and "speak with clarity and authority, from Ukraine to the AUKUS pact with United States and Australia".

Johnson has also praised that the country was "the one that achieved the fastest vaccination in Europe" and "organized rapid supplies of weapons to the heroic Armed Forces of Ukraine" in the face of the Russian invasion, unleashed on February 24 by order of the President of Russia , Vladimir Putin. "We have continued and will continue to have economic strength to give people the cash they need to get through this economic crisis caused by the heinous war caused by Putin," he argued.

In this sense, he stressed that Truss and his "compassionate conservative government" will do "everything possible to get people out of this crisis." "This country will endure and we will win. If Putin thinks he can succeed in blackmailing or harassing the British people, he is dead wrong and the reason is that we will have funds now and in the future because the Conservatives understand the vital symmetry between government action and business of the private sector in a capitalist market".

The outgoing prime minister has also guaranteed that the authorities have worked to "make the streets safer", "build more hospitals", "allocate record funding to schools and teachers' salaries" and "provide short and long-term solutions for energy needs.

Lastly, he stressed that "the union (in the country) is so strong that those who want to break it will keep trying, but they will never succeed." Johnson has also thanked the population and the voters for "giving him the opportunity" to hold office and added that "together they have laid a foundation that will stand the test of time."