IU decides that its deputies vote against the entry of Sweden and Finland into NATO except Garzón, who will abstain

Podemos already decided that its position was abstention. 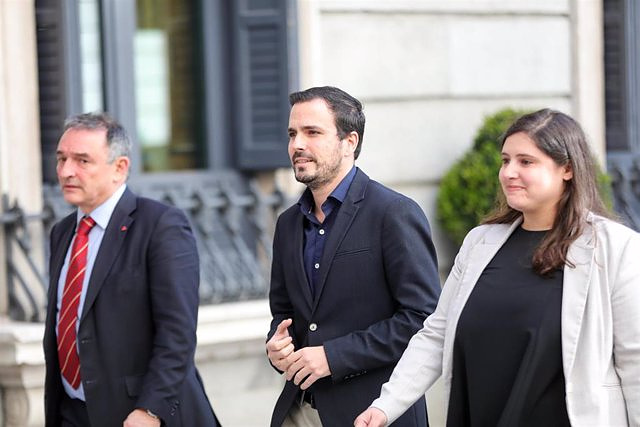 Podemos already decided that its position was abstention

The IU deputies in Congress will vote this Thursday against the entry of Sweden and Finland into NATO except for the case of its federal coordinator and Minister of Justice, Alberto Garzón, who will opt for abstention, like the rest of the group confederal.

The meaning of the vote of IU parliamentarians has been debated and decided by the federal direction, as explained in terms of training, and will be expressed in the plenary session that addresses the adhesion protocol of the countries.

In this way, the IU representatives without executive responsibilities (Enrique Santiago, Roser Maestro, Miguel Ángel Bustamante and José Luis Bueno) will oppose the entry of both Scandinavian nations into NATO while Garzón, who is a member of the Government, will opt for abstention.

From IU they have explained that the debate within the confederal group on the meaning of the vote has been developed with "total normality and understanding" between the different formations that make it up "and according to its operating protocols.

The formation already slipped last Monday, through its federal spokesperson Sira Rego, who was not going to support the measure but did not reveal the meaning of his vote, although he explained that IU has been against the Atlantic Alliance, a historical position that flag since birth.

For its part, Podemos has opted for abstention given that, on the one hand, they defend greater strategic autonomy for the EU without subordination to the interests of the United States and, on the other, they respect the sovereign decision of both EU countries.

This morning the spokesman for United We Can, Pablo Echenique, has downplayed in statements to TVE, collected by Europa Press, that the two forces of the coalition Executive differ in the direction of their vote on this issue (because the PSOE will support this accession ) and has recalled that in other votes they have already voted differently.

Congress will endorse this Thursday the entry of Sweden and Finland into NATO. The two agreements were sent to Parliament in the Council of Ministers on August 1, but until last week they could not be qualified by the Congress Table because the two summer months are outside the regular session period.

To speed up the process now, the accession protocols have been processed in Congress by the urgent procedure and in a single reading, that is, with a single debate in the Plenary that will take place this Thursday, without the need to go through the Commission of House Foreign Affairs.

‹ ›
Keywords:
SueciaFinlandiaIUAlberto GarzónOTAN
Your comment has been forwarded to the administrator for approval.×
Warning! Will constitute a criminal offense, illegal, threatening, offensive, insulting and swearing, derogatory, defamatory, vulgar, pornographic, indecent, personality rights, damaging or similar nature in the nature of all kinds of financial content, legal, criminal and administrative responsibility for the content of the sender member / members are belong.
Related News