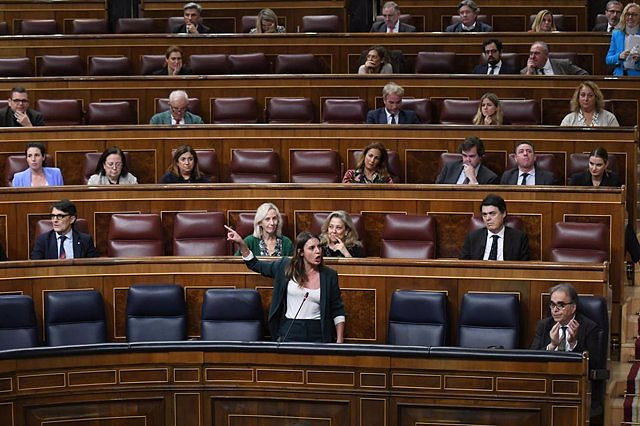 The Minister for Equality, Irene Montero, has accused the PP of being an "accomplice" in the criticism of the Vox deputy in Congress Carla Toscano, who said verbatim that the only merit of Montero to occupy his position is having studied the former vice president in depth Pablo Iglesias.

"I do not forget that the PP has used these arguments many times," he lamented this Thursday in an interview with Rac1 collected by Europa Press, adding that before many have been bordering on the limit, even from progressive sectors, he said.

Montero has regretted that the intervention of the popular during the plenary session "did not exceed the limits of the fascist deputy of Vox but it was very close" and has urged them to make a political reflection.

The spokesperson for the PP in Congress, Cuca Gamarra, asked in a note on Twitter "respect" for Montero, considering that no one has the right to offend her by entering her personal life and demanded that she assume political responsibilities.

The minister thanked the applause of parliamentarians from Unidas Podemos, PSOE, ERC, Bildu and other formations - whom she referred to as the feminist majority in Congress - and asked that it be translated "into a political commitment against violence policy so that no one else suffers from this".

She considers herself very supportive and believes that the applause shows that the parties have "common objectives in defense of feminist rights, in defense of democracy."

Montero has once again defended the solvency of the Sexual Freedom Guarantee Law, known as the 'only yes is yes' Law, and has insisted that critics "are generating unjustified social alarm" by considering that the majority of the courts do not decree reductions in sentences for those convicted of sexual crimes, for which he has refused to resign.

‹ ›
Keywords:
Pablo IglesiasPPIrene MonteroVOX
Your comment has been forwarded to the administrator for approval.×
Warning! Will constitute a criminal offense, illegal, threatening, offensive, insulting and swearing, derogatory, defamatory, vulgar, pornographic, indecent, personality rights, damaging or similar nature in the nature of all kinds of financial content, legal, criminal and administrative responsibility for the content of the sender member / members are belong.
Related News