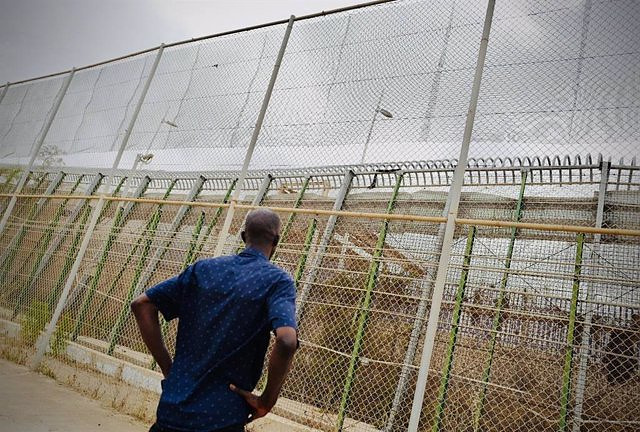 The spokespersons for the Interior of the Congress of Deputies watch from nine in the morning this Friday the eight hours of recordings of the tragedy in Melilla on June 24, in which at least 23 migrants died - some 70 according to the NGOs --. The session, behind closed doors, tries to clarify if there were deaths or inert bodies on the Spanish side of the border, something that the Minister of the Interior, Fernando Grande-Marlaska, denies.

The Interior has offered Congress the full viewing of the material recorded on 24-J with the Civil Guard air resources, the same thing that was sent to the Prosecutor's Office and the Ombudsman for their investigations.

According to sources familiar with said material, there are 75 files, 63 from the drone and ten from the helicopter of the Armed Institute. Two other files are from the fixed cameras of the border perimeter, although far from the Chinatown area.

The forecast is that the meeting behind closed doors will last for several hours, since the spokespersons can ask that the images be stopped and rewound, as well as raise technical questions with the command of the Civil Guard of Melilla who has traveled to Madrid as " custodian" of the recordings.

The Interior spokespersons of all groups participate in the meeting, including Vox, who gave up traveling to Melilla on November 7. The trip coincided with a documentary that refuted the official version, but the party led by Santiago Abascal distanced itself from the attempts to "question" the work of the Civil Guard.

Five months after the incident in the border perimeter, practically all the parliamentary groups maintain their criticism of the management of Minister Fernando Grande-Marlaska, who maintains that on the Spanish side there was no regret for "any tragic event", in reference to migrant deaths.

Criticism has focused, in fact, on whether Moroccan gendarmes went to Spain within a device that Grande-Marlaska defends as "proportional" in the face of a "very violent attack" in which fifty civil guards were injured.

In line with what was maintained by the Ombudsman, in addition, some spokespersons criticize that Civil Guard agents threw stones at the migrants who were trying to reach Spain and want to know why medical aid was not offered to the injured. They also question the use of riot control material and the rejections at the border, which the Ombudsman estimated at 470 outside the law.

The images, according to sources familiar with their content, show that the actions of the almost 2,000 sub-Saharans were "very violent." Migrants threw stones at agents trying to repel entry into Spain. They admit, however, that the recordings also see the occasional throwing of a stone from the police line.

According to these sources, the inert and deceased bodies were always concentrated on the side of the border under Moroccan control. The Civil Guard withdrew at first when they found themselves in a minority and, later, they managed to bag the migrants next to the fence.

The police action, however, did not prevent 134 migrants from passing into Spain, while many others were turned away at the border, for which Moroccan gendarmes were allowed to enter on time, according to the aforementioned sources, which halved the figure of 470 returns.

‹ ›
Keywords:
InmigraciónCongreso De Los DiputadosMarlaska
Your comment has been forwarded to the administrator for approval.×
Warning! Will constitute a criminal offense, illegal, threatening, offensive, insulting and swearing, derogatory, defamatory, vulgar, pornographic, indecent, personality rights, damaging or similar nature in the nature of all kinds of financial content, legal, criminal and administrative responsibility for the content of the sender member / members are belong.
Related News