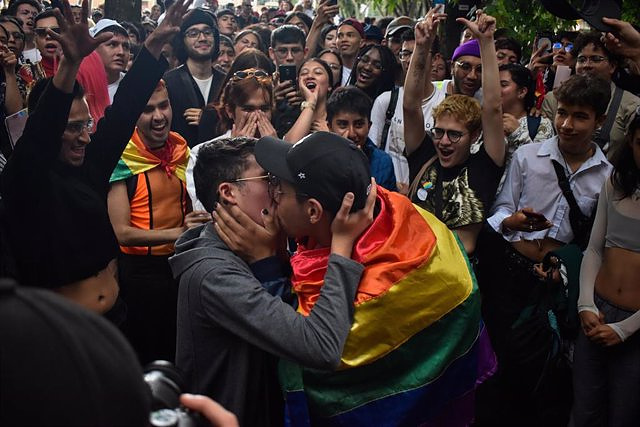 Hundreds of people have taken to the streets of Bogotá this Sunday to protest the latest episode of homophobia recorded in the Colombian capital, after a video was released in which a group of people attacked a gay couple in a public park.

Hundreds of people have attended the place after the complaint of a homosexual couple who received an attack last Saturday for kissing in front of some neighbors in the Engativá sector. The young people have filed a complaint with the Prosecutor's Office for personal injuries, reported 'El Tiempo'.

The video shows how a group of women rebukes and even hits the couple with a stick, while insulting them and demanding that they leave the place.

"We don't want them to do such rude things in front of the children. They're leaving here. Go away," say several of the women, while hitting one of the boys with a mast, as can be seen in the video.

Some protesters have carried posters with messages of support and solidarity with the LGTBI community, while others have carried out actions claiming their rejection of discrimination against homosexuals, reported 'La Semana'.

The case has reached the authorities of Bogotá, who have announced an investigation against the aggressors and their support for the victims.

"We received a complaint of aggression in the town of Engativá, from 6:00 a.m. (local time) we are in contact with the victims to accompany and activate the complaint. We will not tire of saying that it can be done in Bogotá. Thanks to those who have notified", The director of sexual diversity in the capital, David Alonzo, has expressed on his Twitter account.