Hiroshima commemorates the 77th anniversary of the nuclear bomb 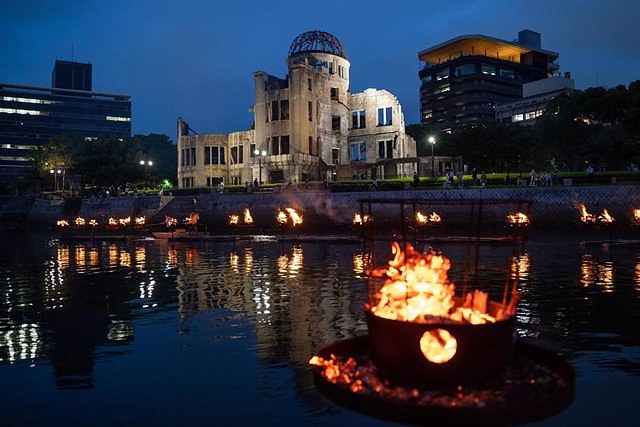 This Saturday thousands of people have remembered the Japanese city of Hiroshima the 77th anniversary of the launch of a US nuclear bomb, the first in history detonated against the civilian population, in the aftermath of World War II.

Like every year, citizens have gathered in the city's Peace Monument Park with the participation of the Japanese Prime Minister, Fumio Kishida, and representatives of 99 countries and the UN, with its Secretary General, António Guterres, at the head. He has been the first UN chief to participate in this annual ceremony in the last twelve years.

The ceremony included a minute's silence at 8:15 a.m., the exact time the bomb was detonated, immediately killing 140,000 people and exposing many more to radiation.

Kishida has assured that "no matter how narrow, rocky and difficult the road is" to a world without nuclear weapons, Japan will continue to pursue this goal despite the global "tension" and following three principles: no possession, no production and no tolerate nuclear weapons in the country.

Also the mayor of Hiroshima, Kazumi Matsui, has warned against those who believe that nuclear deterrence brings peace closer. "The only way to guarantee the protection of life and property is to get rid of all nuclear weapons," he snapped, while calling on world leaders to visit Hiroshima and Nagasaki to see for themselves the consequences of a nuclear attack.

The head of the UN has considered that "nuclear weapons make no sense": "We must ask ourselves what we have learned from the mushroom cloud that rose over this city in 1945," he stressed, according to a statement from United Nations.

Guterres has lamented the bombing of Japanese territory in World War II. He has also reflected on the geopolitical tensions during the Cold War over the "terrifying threats that put humanity within minutes of annihilation."

In turn, he has warned that world leaders are spending huge amounts of money to increase nuclear weapons arsenals with the consequent acceleration of a new arms race. "Crises with serious nuclear backgrounds are spreading rapidly, from the Middle East to the Korean Peninsula, passing through the Russian invasion of Ukraine," he criticized.

Despite the warnings of the possible consequences of the current geopolitical instability, the secretary general has affirmed that he sees "signs of hope".

"Today, from this sacred space, I call on the members of this Treaty to work urgently to eliminate the arsenals that threaten our future," Guterres urged.