Guterres blames developed countries for the floods in Pakistan: "It is a collective suicide" 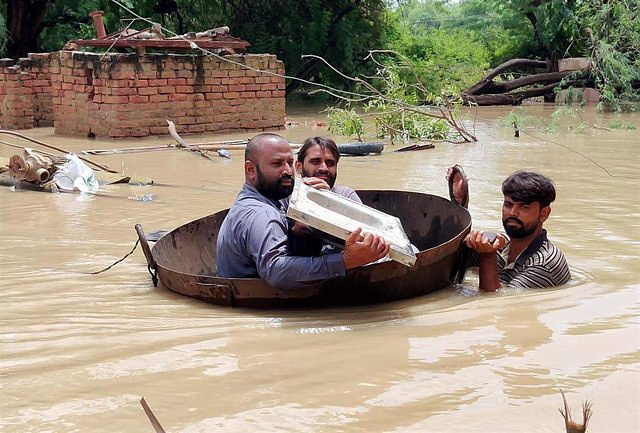 The UN Secretary General, António Guterres, has urged the member countries of the United Nations to offer "immediate assistance" to Pakistan so that it can recover from the effects of the floods that have affected the region for months, appealing to the country is "less to blame than other nations" for the effects of climate change.

"Pakistan and other developing countries, from the Horn of Africa to the Sahel, are paying an appalling price for the intransigence of large emitters who continue to bet on fossil fuels," the UN Secretary General said at a press conference. after meeting with the Prime Minister of Pakistan, Shehbaz Sharif.

Guterres has argued that the world "owes impoverished Pakistan "enormous help" to recover from the devastating floods, as global warming would have contributed to the deluge that has left a third of the country under water.

"From Pakistan, I make a global call: stop the madness, end the war with nature. We must invest in renewable energy now," the United Nations Secretary General stressed.

"Even today, emissions are increasing as people die in floods and famines. This is crazy. This is collective suicide," he added, recalling that Pakistan is just one of many countries that "are not not even close to prepared" for such natural catastrophes.

However, Guterres has expressed his solidarity with the Pakistani people and has reiterated that the UN will do "everything possible" to mobilize the international community in support of Pakistan.

To this end, the United Nations has urged member states to provide the financial and technical means so that the Asian country can "survive" extreme weather events such as "these deadly floods."

The UN has already delivered food aid, as well as economic aid and emergency supplies worth ten million euros, as detailed by the agency in a statement.

The UN Under-Secretary-General for Humanitarian Affairs, Martin Griffiths, has announced that the UN has released seven million euros from the Central Emergency Response Fund (CERF) to reinforce emergency aid in Pakistan.

Added to the disbursement of the three million contributed last month, the total amount rises to ten million.

"The funds will help prevent water-borne diseases and epidemics and provide nutritional supplements, clean water and reproductive health care to the most vulnerable people, as well as feed livestock," the UN Humanitarian Office said in a statement. missive.

‹ ›
Keywords:
PakistánOnuCambio Climático
Your comment has been forwarded to the administrator for approval.×
Warning! Will constitute a criminal offense, illegal, threatening, offensive, insulting and swearing, derogatory, defamatory, vulgar, pornographic, indecent, personality rights, damaging or similar nature in the nature of all kinds of financial content, legal, criminal and administrative responsibility for the content of the sender member / members are belong.
Related News