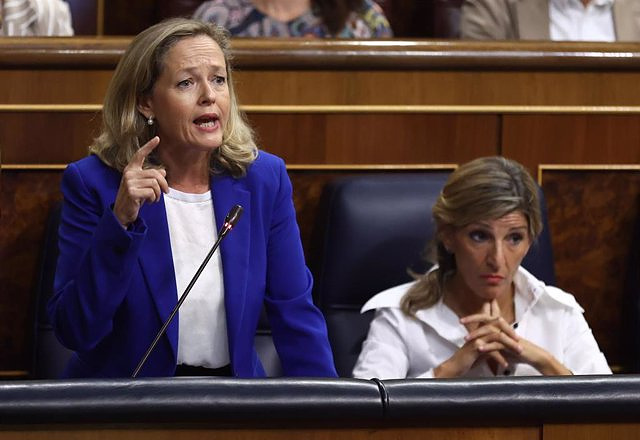 The First Vice President and Minister of Economic Affairs and Digital Transformation, Nadia Calviño, stated this Wednesday that the Executive is meeting these days with the financial sector to see how to continue deepening and advancing in support for those families who may have difficulty in the mortgage payment.

"We will listen to all the proposals, we will attend to and analyze all the ideas very carefully, because we are determined to continue supporting the citizens of this country and face the challenges that may come from outside in the best possible way," said the first vice president in the control session to the Government to the Congress of Deputies.

The president of Ciudadanos, Inés Arrimadas, has urged the Executive to promote some economic measure to help families with the payment of mortgages in the face of this rise in rates that comes to add to inflation. "Mortgages are what keep millions of Spaniards awake at night," assured the deputy, who has warned that in many cases they are seeing rises of around 170 or 180 per month.

"They are having increases of about 1,300 and 1,400 euros a year, which is what those very expensive iPhones are worth that you have agreed to give us to the deputies and from Ciudadanos we are going to say no, because it is a real shame " , has reproached the deputy.

Calviño recalled that in 2019 the Mortgage Law was changed so that those who have a variable rate mortgage can change it to a fixed rate for free if they have a mortgage of more than three years, something that "a good number of people" have already done, according to the vice president.

"In any case, we will continue to act so that they have the best possible income, because these are the ones that are going to give them the strength to be able to face any challenge that lies ahead", the vice-president remarked.

During the control session, Arrimadas explained his proposal, which involves approving a temporary and extraordinary tax deduction to offset at least part of this increase in homes and mortgages for primary residences.

"Do not tell us that there is no money, because today you have 22,000 million euros more in collection due to inflation and, in addition, you are the most expensive government in history, which does not stop increasing charges by finger", he criticized the deputy, after urging the Executive to stop paying "the only mortgage that worries them, which is the one they have with their separatist partners."

In addition, the president of Ciudadanos has taken advantage of her intervention to charge against the series that Moncloa is preparing and that Pedro Sánchez will star in. "We find him the same as a leading man," she pointed out.

On the other hand, the CUP deputy in Congress, Mireia Vehí, asked the economic head of the Government during the session how she is going to guarantee the fundamental right to food in the face of rising inflation.

Given this, Calviño has not specified specific measures, but has defended that for almost a year the Government has been taking measures to try to contain the rise in prices to support all citizens, with special attention to groups vulnerable and also supporting those productive sectors affected, such as agriculture and livestock.

In addition, he highlighted that in the month of August there has already been a moderation in this rise in inflation. "With all the uncertainty and all the caution derived from the international situation, hopefully we continue on this downward path so that as soon as possible we can have a more alleviated situation, a more beneficial situation and a more sustainable and fairer growth in our country", he stressed. Calvin.

‹ ›
Keywords:
Sector FinancieroNueva EconomíaNadia Calviño
Your comment has been forwarded to the administrator for approval.×
Warning! Will constitute a criminal offense, illegal, threatening, offensive, insulting and swearing, derogatory, defamatory, vulgar, pornographic, indecent, personality rights, damaging or similar nature in the nature of all kinds of financial content, legal, criminal and administrative responsibility for the content of the sender member / members are belong.
Related News