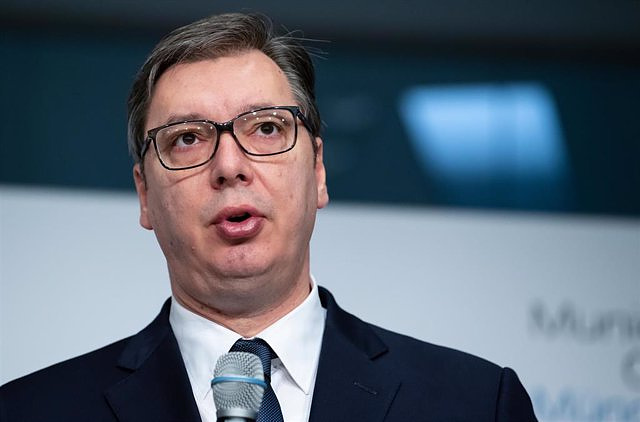 The president of Serbia, Aleksandar Vucic, revealed this Saturday that Germany and France have sent him a new proposal for "an immediate and definitive solution" to the dispute over Kosovo, de facto independent of Belgrade since 1998.

"Last night I had a two-hour conversation with the representatives of (German Chancellor) Olaf Scholz and (French President) Emmanuel Macron in which they conveyed to me a proposal that should lead to an immediate and definitive solution, as they say, to the problems we are facing and the pending issues related to Kosovo. Needless to say, it was not easy at all," Vucic explained this Saturday at a press conference picked up by radio station B-92.

Vucic stressed that they are "the most powerful countries in Europe" and that "they believe that new conflicts are not good." "The great western powers want to solve these problems because there is a war in Europe." "In Serbia we may not understand it, but if there is an agreement for a solution, the possibility is avoided and it would be much easier to respond to the President of the Russian Federation, Vladimir Putin, about the legal precedents and the independence of Kosovo," he said. .

"So in all of this we have become collateral damage to great power conflicts and their past behavior," Vucic said. "Then they would say that a solution to the conflict in Ukraine is only possible if Crimea and Ukraine reach an agreement," he said.

Serbia, a historical ally of Moscow, is the only country in the Balkans that has not aligned itself with European sanctions for the invasion of Ukraine, although the country has denounced the Russian military attack in the United Nations votes.

‹ ›
Keywords:
AlemaniaFranciaBelgrado
Your comment has been forwarded to the administrator for approval.×
Warning! Will constitute a criminal offense, illegal, threatening, offensive, insulting and swearing, derogatory, defamatory, vulgar, pornographic, indecent, personality rights, damaging or similar nature in the nature of all kinds of financial content, legal, criminal and administrative responsibility for the content of the sender member / members are belong.
Related News