Germany agrees to a new package of more than 65,000 million euros to alleviate the energy crisis

Scholz assures that Russia "is not a reliable energy supplier". 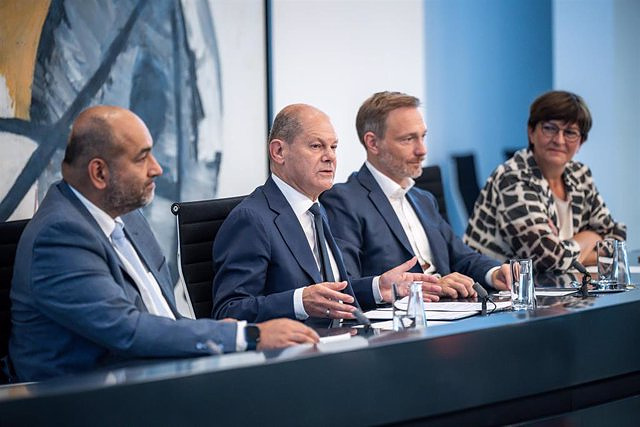 Scholz assures that Russia "is not a reliable energy supplier"

German Chancellor Olaf Scholz assured this Sunday that Russia is not a "reliable energy supplier" after the government has agreed on a new aid package of more than 65,000 million euros to alleviate the energy crisis.

In this sense, the German chancellor has highlighted that "Putin's Russia has not complied with the supply contract" for a long time. "The trigger for this very difficult situation is Russia's invasion of Ukraine," he said, adding that, despite everything, they will be able to get through the winter.

"This is about leading our country safely through this crisis," Scholz explained, adding that, in view of citizens' concerns about rising electricity prices, they are taking the situation "seriously." .

On December 1, pensioners will receive a single aid for the price of energy of 300 euros, which will be 200 euros in the case of university students. There will also be a reduced price for a certain basic electricity consumption. For additional consumption above that value, the price will not be limited.

The Government also plans to introduce a new reduced subscription for regional transport throughout the country, with a price that will be between 49 and 69 euros per month. The financing of this subsidy still has to be approved by the regional governments.

The German government assured on Friday that the gas supply is fully guaranteed, despite a "tense" context that added a new chapter with the announcement of the indefinite closure of the 'Nord Stream 1' gas pipeline.

The Russian giant Gazprom announced that the closure that was initially going to be temporary -- for three days, until this Saturday -- will be indefinite, after an oil leak was detected during maintenance work on the only turbine that was still active.

Gas reserves in Germany are around 85 percent of total capacity. The German Government had established by decree that at least this percentage should be reached until October 1, so the objective has been met one month in advance. However, the levels can go back down.

On the other hand, the German Development Minister, Svenja Schulze, announced this Sunday a new humanitarian aid package to kyiv, valued at 200 million euros, with the aim of helping internally displaced persons in the framework of the Russian invasion. from Ukraine.

"The bulk of our new aid, 200 million euros, will go to a program of the Ukrainian government to support internally displaced persons," said Schulze, adding that this amount will serve "to ensure that displaced people in Ukraine can continue to satisfy their most basic needs.

Schulze has indicated that he will speak with the Ukrainian Prime Minister, who is on an official visit to Berlin, to discuss in detail other types of aid for the displaced, whose most immediate needs are heating, clothing, housing and health care. .

‹ ›
Keywords:
AlemaniaRusiaUcrania
Your comment has been forwarded to the administrator for approval.×
Warning! Will constitute a criminal offense, illegal, threatening, offensive, insulting and swearing, derogatory, defamatory, vulgar, pornographic, indecent, personality rights, damaging or similar nature in the nature of all kinds of financial content, legal, criminal and administrative responsibility for the content of the sender member / members are belong.
Related News