Gattuso: "An English club has offered a lot of money for Guedes, we have to accept" 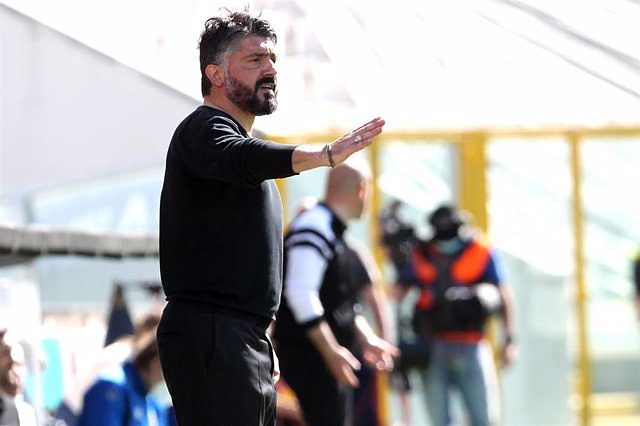 The Valencia CF manager, Gennaro Gattuso, confirmed that the club had received a "big money" offer for Gonçalo Guedes that they plan to "accept", meaning that the Portuguese player's departure is imminent, while he hoped that reinforcements would arrive .

"This morning Miguel Corona called me. He explained the situation to me. An English club has made an offer and that's it. It's a lot of money. I don't know the exact figure, but we have to accept and we'll do something to improve the team", The Italian coach pointed out in Mestalla, after winning the Taronja Trophy this Saturday, thanking the fans and the 30,000 gathered for their support.

The Portuguese was the protagonist in the run-up to the presentation of Valencia to his public for the news about his possible departure and also in the post. Guedes did not wear a short, nor did he play in the 2-1 victory over Atalanta. "I have no promises, but the club knows very well that we have to complete the team. I hope we are going to sign 2-3 players," added the coach.

"I think I can only speak positively about my team. It is a team that is giving everything in training. The team is incredible. They are playing totally different football than last year. It is not easy to radically change everything in a few months, but I'm seeing good things. I'm very proud of the team for how it works", he added, ruling out the signing of Arthur.

In addition, the coach 'che' acknowledged being angry for not focusing the press conference on those who are there and on the good game against Atalanta. "I'm angry because after a game we've played against a great team, I understand that you ask me about everything, but I think it's not correct to talk only about Guedes. We're talking about Soler, Gayà, Vázquez, about the whole team," he said.

"Guedes, with the money that the other team is going to pay, it was not possible for the club to retain him. I am angry for talking only about Guedes for fifteen minutes. I think we have to incorporate players because LaLiga is complicated and long. We have the team, we have 18 players to cover injuries," he added.

In addition, Gattuso was asked about the situation of the team ahead of the start of the league next week. "This victory is a friendly match. We have to work hard because our game is not easy and we have to think game by game. Now we have a game against a team with an offensive mentality, with many new players. We have to think about Girona and We'll talk about something else later," he said.

‹ ›
Keywords:
Valencia CF
Your comment has been forwarded to the administrator for approval.×
Warning! Will constitute a criminal offense, illegal, threatening, offensive, insulting and swearing, derogatory, defamatory, vulgar, pornographic, indecent, personality rights, damaging or similar nature in the nature of all kinds of financial content, legal, criminal and administrative responsibility for the content of the sender member / members are belong.
Related News