Garbajosa: "This team transcends what a basketball team is"

"There is no doubt about Scariolo's continuity, he has a contract until 2024". 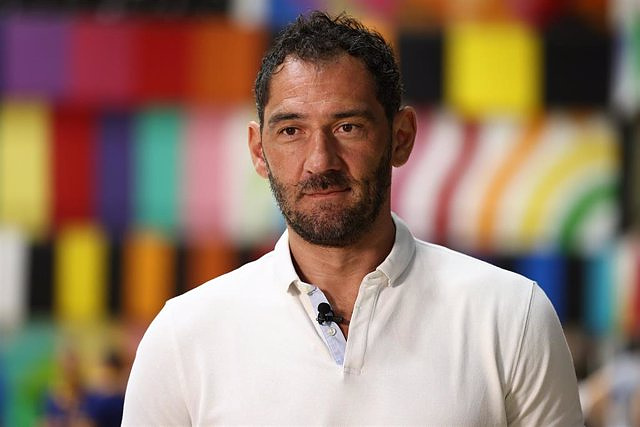 "There is no doubt about Scariolo's continuity, he has a contract until 2024"

The president of the Spanish Basketball Federation, Jorge Garbajosa, acknowledged on Wednesday that "no one believes" in the chances of the Spanish team in the Eurobasket as much "as they do" because of "the heart" they have and assured that, for him, "transcends what a basketball team is."

"I am convinced that in the semifinal Spain is going to stop, and that is because this team transcends what a basketball team is. Nobody believes in them like themselves. The potential, the heart that this team has. We can talk of tactical variants and a thousand things, but without the heart of the 'capi' and of all the others, what we are experiencing would be impossible", he assured at a press conference in Berlin (Germany) together with the director of competitions, Elisa Aguilar, and the director general of the FEB, Óscar Graefenhain.

Jorge Garbajosa qualifies the national team as one of the "most beloved teams in history" in Spain for what it transmits. "Yesterday someone told me that one of those phrases that move you is how nice it is to see how we make people happy, and I think that's what inspires this team and what has been inspiring for twenty-odd years, which was inherited from a generation and that has been passed down from generation to generation," he said.

"We faced a very complicated semifinal, but after the game, seeing the press conference and what I was able to talk to them about, they told you that there are two left, to play a final or for a third and fourth place," said the former player, who got four medals (one gold, two silver and one bronze) at the Eurobasket.

Garbajosa wants it to be "hopefully a European Championship final", because "it was a team that for a short time generated many doubts, but they themselves have come up against those doubts". "It makes me very excited," he added.

The president of the FEB wanted to send a message of calm about the future of Sergio Scariolo, assuring that "there is no doubt about his continuity". "He has a contract until 2024, but above all a commitment. This year was complicated. After Pau (Gasol), Marc (Gasol), Ricky (Rubio), there could have been doubts," he said.

"We want him to be there yes or yes. We have a good relationship with Virtus Bologna and there is no problem. He is the leader of this team," Garbajosa said. The former player says he knows Saciolo "since prehistory". "We don't even need to talk. He has always maintained a hierarchy to have a united and competitive group. It was said 'this team trains itself' and making a team in 10 days is very difficult," he said.

The man from Madrid also wanted to remember those absent in this final phase, but who have been part of the process. "Apart from these 12 players, the staff, the federation personnel, I remember a lot about the players who are not here, some due to injury and others due to discards," he commented.

"Only 12 fit but they deserve to be here, I'm talking about Fran (Guerra), Quino (Colom), Yankuba (Sima) and many players, Alberto Abalde, who made a huge effort knowing that it was almost impossible for him to arrive and wanted to try , about Sergi Llull, who I spoke with him yesterday, and about all of Spanish basketball," he said.

The president of the FEB valued "the clubs, the regional federations or the training coaches", because for "the jewel in the crown" to shine, a very important base work is needed so that the players develop and return "to excite everyone".

AGUILAR: "ALL TRAINING IS KEY"

The director of competitions of the FEB, Elisa Aguilar, has influenced training as "the key" to the success of the selection. "That's where we started capturing talent so that later we can enjoy it throughout the championship. I would like to remind you that we have a Spanish Mini Championship, 500 players start there, we started eleven years old to capture what is the jewel of this Federation, the players and players. Apart from the players we have top coaches and here we have the best", he commented.

For his part, the general director of the FEB, Óscar Graefenhain, highlighted the importance of the reliability of the members of the federative body. "They have been supporting us from the beginning. We have absolute loyalty to our members. As long as they want to continue to continue being with us in the same conditions that we always talk about. We are credible and we have a joint project with them," he said.

For Graefenhain, the sports results help open other doors that are not open right now. "It could be that companies that were considering investing in other sectors right now suddenly say that we can try it in basketball, that they are people who always offer a good image, results and work," he said.

From the economic point of view, the general director of the FEB stressed that it helps a lot to open those doors and then invest judiciously in championships, training categories and in support of clubs, as well as in improving the concentrations of the training categories. . "In that the boys and girls are in the best hotels, have the best food. Anything that supports the player for us is the key and we hope it will have an effect," he added.