Gamarra recalls the attacks on Ayuso and Botella after the row in Congress between Vox and Montero: "Nobody should suffer them"

He says that what happened in the Lower House is not "new" and stresses that Podemos "also practices" those attacks that are personal. 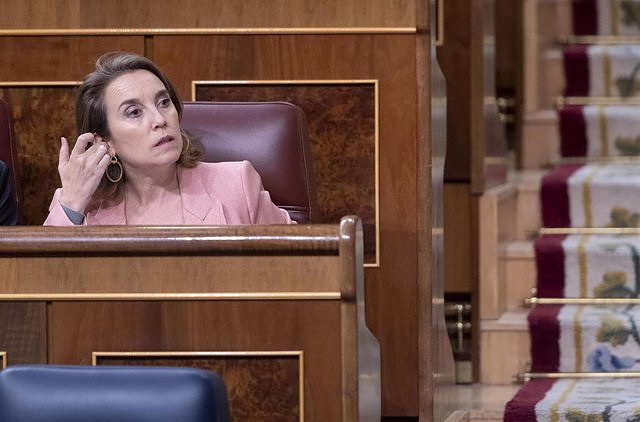 The general secretary of the PP, Cuca Gamarra, has affirmed that "no one" should suffer attacks like the one that the Minister of Equality, Irene Montero, experienced this Wednesday in Congress, and has stressed that Podemos also "practices" them, entering the " personal realm". Thus, she recalled that Podemos made "similar" allusions against the former mayor of Madrid, Ana Botella, and that the president of the Community of Madrid, Isabel Díaz Ayuso, also receives attacks in the Madrid Assembly.

In the plenary session this Wednesday, the Vox deputy Carla Toscano caused a monumental row by assuring that the only merit of the Minister of Equality, Irene Montero, is "having studied in depth" Pablo Iglesias, her partner and founder of Podemos . Montero later asked that the words not be deleted from the Sessions Journal so that the "political violence" of the Vox charges is recorded.

In statements to journalists in Congress, Gamarra stressed that there are "many reasons why today" Montero was no longer Minister of Equality after the consequences of the application of the 'only yes is yes' law that "reduces penalties for sex offenders and some are even taking to the streets".

Although he has insisted on the dismissal of Minister Montero, Gamarra has stressed that the Spanish "what they deserve is that respect among political adversaries be present" in the parliamentary debates that are held in the Lower House.

"Yesterday is not a novelty because this is happening in Spanish politics and also at the hands of Podemos," he proclaimed. That said, she has indicated that in recent years they have been able to see how politicians like Ana Botella have been attacked "by leaders of Podemos."

In addition, he stressed that they have also been able to see "not so long ago in the Madrid Assembly how the president of the Community is attacked using those same arguments and entering the personal sphere."

In this sense, the general secretary of the PP has asked for respect because "no one has to suffer this type of attack." "They shouldn't make those same attacks either," he snapped at the purple party.

Previously, in an interview on Antena 3, which was collected by Europa Press, Gamarra pointed out that what he experienced in Congress this Wednesday is "one more chapter of what the arrival of Podemos in Spanish politics meant".

After assuring that these phrases should not be part of political discourse, Gamarra recalled that "Pablo Iglesias himself made references to the same or similar to those made against Irene Montero yesterday against Ana Botella." "And this is not only happening in Congress but we are also experiencing it in the Madrid Assembly against Isabel Díaz Ayuso", he reiterated.

The spokesperson for the Popular Group has pointed out that this "is not a specific case but is very present in Spanish politics". "And Podemos is a party that practices it. Just as it condemns it when these accusations are leveled at them, it should also denounce it when they themselves carry out those same actions," she demanded.

‹ ›
Keywords:
PodemosPPAsamblea De MadridIrene MonteroVOXDíaz Ayuso
Your comment has been forwarded to the administrator for approval.×
Warning! Will constitute a criminal offense, illegal, threatening, offensive, insulting and swearing, derogatory, defamatory, vulgar, pornographic, indecent, personality rights, damaging or similar nature in the nature of all kinds of financial content, legal, criminal and administrative responsibility for the content of the sender member / members are belong.
Related News