Gamarra, on sedition: "If the PSOE deputies vote yes, they will be breaking the word they gave their voters"

He believes that this vote to repeal this crime will confirm that "sanchismo has devoured socialism". 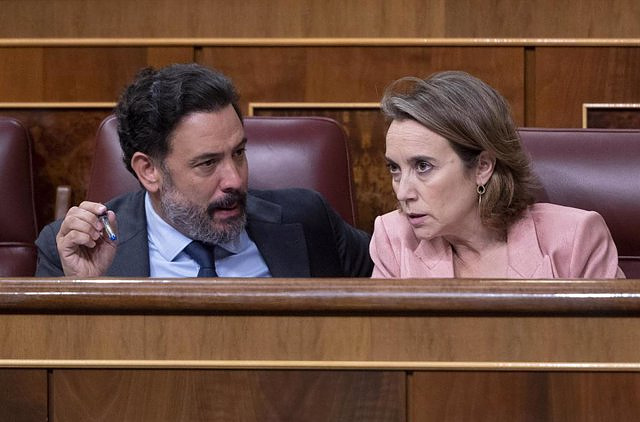 The general secretary of the PP, Cuca Gamarra, has assured that if the deputies of the PSOE vote this Thursday in plenary session of Congress in favor of repealing sedition, they will be "breaking the word they gave to their voters" in the last general elections, at the same time that it will be confirmed that "sanchismo has devoured socialism".

The Popular Group has requested that the vote to take into consideration the PSOE and United Podemos bill on the repeal of the crime of sedition be carried out individually and by appeal, with the aim that each socialist deputy can "portrait themselves according to this party.

When asked if she trusts that any socialist deputy will break the voting discipline this afternoon, Gamarra has said that she does not know if anyone will, but has warned that if they do not, "what they are going to break is the word they gave to their voters." .

Thus, he has said that the voters of the PSOE "trusted" that word given to him by the candidates to be deputies in Congress, who then told them that "they would classify the crime of illegal referendum, that they would toughen the crime of sedition and that they would put Puigdemont before the Spanish Justice to render accounts".

"And they are going to do the opposite. Therefore, I don't know if they will break the voting discipline, but if they vote yes to the repeal of the crime of sedition, they will be breaking the word they gave their voters," Gamarra declared in statements to journalists in Congress.

According to Gamarra, with this vote the "deception" of the Spanish will be "materializing" with "a single objective, power for power's sake, even if that means weakening the rule of law and that the independentistas are today stronger than they were." Yesterday".

Previously, in an interview on Antena 3, which has been collected by Europa Press, Gamarra has insisted on the idea that today "the great lie of Sánchez and the PSOE to the Spanish" is materializing. "Today the Socialist Party itself brings the opposite to the Chamber: impunity for those who broke the constitutional order," he added.

In this sense, he has reminded the socialist barons who do not agree with this reform that "today is the day of truth, today we vote" and he has stressed that politics are not words but deeds and what the vote materializes in that the citizens gave. In his opinion, this is "one more step towards the weakening of the constitutional order and the rule of law."

"Sanchismo has devoured socialism, and those who claim to raise the flag of socialism against Sánchez are now facing the moment of truth with the processing of the bill that will mean a Penal Code tailored to the leaders of Esquerra who have pending accounts with the Justice or are disqualified from running for elections, a tailor-made suit so that the President of the Government can continue in La Moncloa", he indicated.

According to Gamarra, this responds to a roadmap that materialized with the investiture of Sánchez and the pardon and today continues with the repeal of the crime of sedition and with another roadmap in his opinion to be rewritten: embezzlement. "If the PSOE did not bring this law to Congress today, there would be no PGE", he concluded.

‹ ›
Keywords:
PSOEPP
Your comment has been forwarded to the administrator for approval.×
Warning! Will constitute a criminal offense, illegal, threatening, offensive, insulting and swearing, derogatory, defamatory, vulgar, pornographic, indecent, personality rights, damaging or similar nature in the nature of all kinds of financial content, legal, criminal and administrative responsibility for the content of the sender member / members are belong.
Related News