Gamarra differentiates the European tax from the Sánchez tax: "They are very different things"

He adds that the PP says "yes" to lowering taxes and bills but responds with a "no" to raising taxes to collect more as Sánchez seeks. 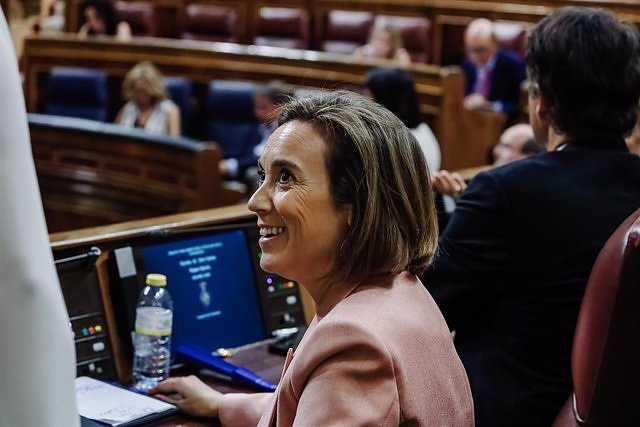 The general secretary of the PP and spokesperson for the Popular Group in Congress, Cuca Gamarra, has differentiated this Wednesday the European rate for energy companies to "lower the bill" for consumers of the temporary tax on banks and energy companies promoted by the Executive and that, in his opinion, what he is looking for is to "increase the collection".

"I think there are two very different things. One thing is the rate that Europe raises and another thing is the Pedro Sánchez tax. The rate that Europe raises is directly focused on lowering the receipts of Europeans and, therefore, of the Spanish; while the tax that Pedro Sánchez raises is going to increase the collection", Gamarra declared to journalists in the corridors of Congress.

This was pronounced shortly after the president of the European Commission, Ursula Von der Leyen, estimated that the measures to limit the extraordinary profits of the inframarginal electricity producing companies, from renewable or nuclear, and the rate to the producers from fossil fuels will raise 140,000 million euros in the EU.

Gamarra -who heads the Popular Group that on Tuesday voted 'no' in the plenary session of Congress to the PSOE and United We Can proposal that creates new taxes on large energy companies and banks- has pointed out that "everything that involves lowering taxes and lower bills, at the outset the PP says yes; but everything that involves raising taxes to collect more, at the outset is no".

The leader of the PP has stressed that the Government has obtained more than 22,000 million extra euros in its collection in the first seven months of the year. "Spain does not have a collection problem. What the Spanish do have is a problem paying their bills," she added.

Gamarra explained that the rate raised by Europe would have a "finalist" character and, therefore, "would have a direct focus" on the bills, "not towards the cash of the Government of Spain". For this reason, he has insisted that they are talking about "different things".

The leader of the PP has stressed that this difference between what Brussels proposes and what the Government does is one of the reasons why her party had requested the withdrawal of the PSOE and United We Can bill, to wait for the pronouncement of Europe and "so that the Government does not have to rectify itself again in relation to what Europe can establish".