He links the "rush" to renew the TC with the possible resources of the convicted and says that Sánchez has no "moral or ethical limit". 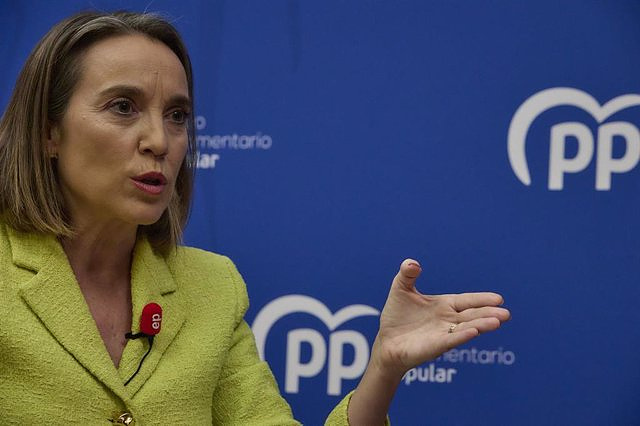 The general secretary of the PP, Cuca Gamarra, considers that granting a pardon to the former president of the Junta de Andalucía José Antonio Griñán, convicted of the ERE case, would be "the height of the abuse of power" by the Prime Minister, Pedro Sánchez, who, in his opinion, "does not have any type of moral or ethical limit" in his political action. In addition, she believes that María Jesús Montero, who was an Andalusian counselor, is "disqualified" from continuing in the Executive.

This is stated in an interview with Europa Press, in which he also links the "rush" of the Executive to renew the Constitutional Court with the appeal that is taken for granted that Griñán will present once the Supreme Court has confirmed the sentence that, among other penalties, set for him six years in prison.

To the President of the Government's comment that, in this case, they are paying "the just for sinners", the 'popular' leader replies that "the just Andalusian taxpayers have paid more than 670 million euros to those who have been convicted". "What is not understandable is that a Prime Minister calls into question the action of Justice. It is what we needed to see!" She denounces, making Sánchez act like this instead of "assuming responsibilities".

"We are talking about two former presidents of the PSOE and also two presidents of the Board, directors and senior officials who have been sentenced because more than 670 million euros from the fair Andalusian taxpayers went to other pockets that were not what they were intended for. ", he remarks.

Gamarra does not rule out that the objective of those words by Sánchez, which other socialist leaders have also repeated, is intended to pave the way for the granting of a pardon. "It could be, but it would already be the height of the abuse of power," he warns.

In addition, he recalls the role of the current Minister of Finance as a counselor in the governments of Griñán and the also convicted Manuel Chaves, during which "670 million were stolen because they were embezzled." In her opinion, she Montero "has been appointed deputy general secretary of the PSOE before the sentence because it would have been unthinkable that she could have been after" the Supreme confirmed the sentence of the ERE.

On the other hand, the also spokesperson for the Popular Group in Congress suspects that the "rush" of the Government to renew the Constitutional Court is related to the fact that this body will foreseeably have to rule on the resource that Griñán's defense plans. "When we talk about Pedro Sánchez, nothing happens by chance, time shows us the reason for things," she slides.

Thus, he blames the president that he only cares about appointing new magistrates for TC but not "the vacancies in the Supreme Court, in the National Court, the superior courts of justice or the provincial hearings, which affect the day-to-day life of thousands of Spaniards with pending cases.

"He only cares that the TC vacancies are filled and, obviously, when you see what the TC is going to have to solve shortly, you realize that it is not by chance," says Gamarra, for whom, behind "the rush that the President of the Government now has" may be that "who sees the appeal before the TC that affects Chaves and Griñán have been appointed by him".

And it is that, according to the 'number two' of the PP, Sánchez is guided "always by a political interest" and does not hesitate to "use all the institutions" to achieve his objectives. Asked if the 'popular' fear 'dirty play' on the part of the Prime Minister and that is why its leader, Alberto Núñez Feijóo, maintains that he can use all the means of the State to stop a change in the political cycle, Gamarra replies that "the phrases of Pedro Sánchez always show their intention".

At this point, he mentions the 'let's go for it all' that the socialist has pronounced on several occasions in recent weeks. From his point of view, it is "an entire declaration of intent" of what the president "is willing to do to remain in power." In addition, he abounds, "there are the precedents of everything he has already been able to do" up to now, such as the use "of all State institutions at the service of the Government and his own."

"He has done it with the Sociological Research Center (CIS); with the National Intelligence Center (CNI), dismissing its director; he does so by questioning the National Institute of Statistics (INE), which led to the resignation of its director. It has sought control of all the bodies in which it can act, such as the State Attorney General's Office," Gamarra lists.

All this, he argues, proves that Sánchez "is willing to do everything that is necessary and within his reach in order to use the instruments of the State for the benefit of the Government", ignoring that "the State transcends the figure of the President of the Government" .

"Therefore -- he warns -- we can expect absolutely anything, we see that he does not have any type of line or moral or ethical limit in politics and whoever has been able to make Bildu and ERC his preferred partners will not have any type of inconvenience in carrying out any measures that you can use at your disposal".

That is why he also does not doubt that Sánchez will set the general elections "when it is most convenient, even if it is bad for the Spanish." "Sánchez's agenda is that of his own survival," says Gamarra, who believes that the "divorce" between the president and society is total "due to the disaffection and lack of empathy" that, he says, shows when he "minimizes and ignores" the "problems that the Spaniards really have".

In his opinion, "instead of assuming responsibilities and planting solutions", Sánchez "diverts responsibilities to third parties" and, on top of that, "seeks constant confrontation between Spaniards" instead of "seeking harmony" with measures and "ideological impositions that abandon centrality and go to the extremes".

‹ ›
Keywords:
Junta De AndalucíaPedro SánchezEREPPMaría Jesús MonteroIndultos
Your comment has been forwarded to the administrator for approval.×
Warning! Will constitute a criminal offense, illegal, threatening, offensive, insulting and swearing, derogatory, defamatory, vulgar, pornographic, indecent, personality rights, damaging or similar nature in the nature of all kinds of financial content, legal, criminal and administrative responsibility for the content of the sender member / members are belong.
Related News