Galán (Iberdrola) meets with the Australian Prime Minister after investing 3,000 million in the country 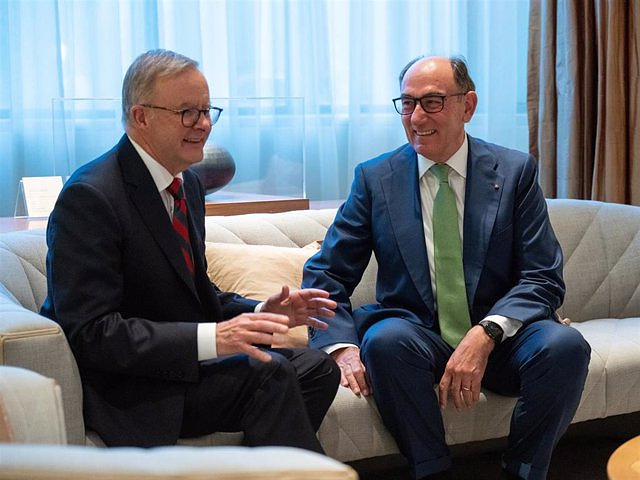 The Chairman of Iberdrola, Ignacio Galán, has met with the Prime Minister of Australia, Anthony Albanese, and with the Federal Minister for Climate Change and Energy, Chris Bowen, to detail the investment of up to 3,000 million euros that the Spanish company intends perform in the country.

At the meeting, Galán presented the company's main plans to supply new renewable energy capacity, battery storage, green hydrogen projects and investment in transmission networks, as reported by the company.

"The country's huge renewable potential and its clear and stable policy framework provide the best scenario for Australia to establish itself as a leading global power in the energy transition, while maintaining its leadership as one of the world's largest energy exporters thanks to green hydrogen." , assured the president of Iberdrola.

Galán wanted to emphasize that Iberdrola "is prepared to invest and contribute its resources and skills to help promote the new jobs and economic opportunities that a greener and more intelligent energy system provides Australia."

Iberdrola has made a strong commitment to the Australian energy market since 2020 with the acquisition of Infigen Energy, the main renewable energy company in Australia.

The new investment figures double the 2,000 million that Iberdrola Australia has already invested in projects such as the Avonlie solar park and the Flyers Creek wind farm, in New South Wales, and the Port Augusta renewable energy park, in the south Australia, the largest hybrid wind-solar park in the southern hemisphere.

Similarly, in recent months Iberdrola has acquired the rights to the world's largest wind farm in Mount James, with 1,000 megawatts (MW), the 360 ​​MW Broadsound photovoltaic plant, in Queensland, and has invested in a smart solutions business , Autonomous Energy, which offers tailored energy products for commercial and industrial companies.

Iberdrola has a mature portfolio of more than 2 gigawatts (GW) of development projects and plans to reach 4 GW in the coming years, which will facilitate the consolidation of renewable energies as the main vector of the energy transition.

Currently, the company has installed 1,062 MW of renewables (wind, solar and batteries). In addition, it is building two new facilities with a combined capacity of 391 MW whose commissioning is scheduled for 2023.

‹ ›
Keywords:
IberdrolaCambio Climático
Your comment has been forwarded to the administrator for approval.×
Warning! Will constitute a criminal offense, illegal, threatening, offensive, insulting and swearing, derogatory, defamatory, vulgar, pornographic, indecent, personality rights, damaging or similar nature in the nature of all kinds of financial content, legal, criminal and administrative responsibility for the content of the sender member / members are belong.
Related News