Felipe VI highlights the "effort" and "leadership" of family businesses

The King inaugurates in Cáceres the XXV National Congress of Family Businesses, which brings together 500 businessmen. 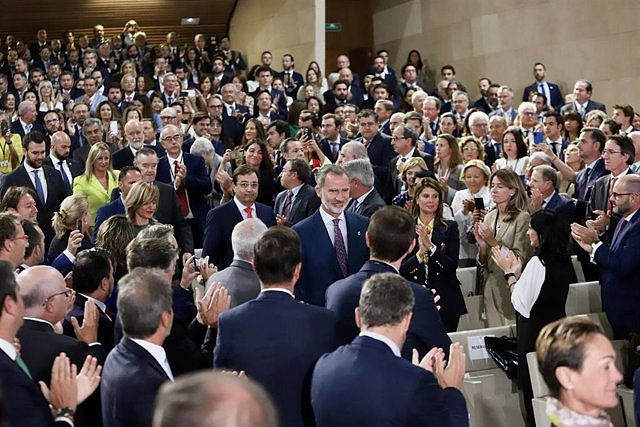 The King inaugurates in Cáceres the XXV National Congress of Family Businesses, which brings together 500 businessmen

King Felipe VI inaugurated this Monday the XXV National Family Business Congress, which brings together nearly 500 businessmen from all over Spain in Cáceres, where he highlighted the "effort", the "leadership" and the "sense of responsibility " of these companies to understand "many of the achievements that our country has achieved in the last three decades".

In his speech, Felipe VI highlighted the values ​​of the family business, which are "an intangible asset of enormous importance", he said, around which people and projects are grouped in the same direction: "that of prosperity and the ambition of wanting to do things better, despite the difficulties of each moment".

In his speech at the Palacio de Congresos in the capital of Cáceres, and in the presence of some of the representatives of large companies such as Inditex, Ferrovial or Banco Santander, among others, the King stressed that family businesses have the "advantage" to know better than anyone the problems and needs of the country.

"Your leadership involves not only carrying out a business project, but ensuring that this project benefits employees, suppliers, customers, in short, the closest environment, generating and maintaining an ecosystem of proximity with a positive impact for all those who participate in it", he said.

He also recalled the "difficult moments" derived from the pandemic, the increase in inflation or the "geopolitical tensions" as a result of the Russian invasion in Ukraine, which have "notorious effects on energy and food prices". "In this environment, which is by no means simple, is what you operate in and also where you have to make important decisions," she stressed.

At the opening of this congress, which coincides with the thirtieth anniversary of the creation of the Family Business Institute (IEF), the president of the IEF, Andrés Sendagorta, and the president of the Junta de Extremadura, Guillermo Fernández Vara, also took part.

‹ ›
Keywords:
Rey Felipe
Your comment has been forwarded to the administrator for approval.×
Warning! Will constitute a criminal offense, illegal, threatening, offensive, insulting and swearing, derogatory, defamatory, vulgar, pornographic, indecent, personality rights, damaging or similar nature in the nature of all kinds of financial content, legal, criminal and administrative responsibility for the content of the sender member / members are belong.
Related News