Feijóo, willing to meet with Sánchez to renew the CGPJ when he calls him, but with the conditions set by the PP

He sees Lesmes' speech as "sensible" although he does not think it makes sense for him to resign and accuses the Government of "interventionism". 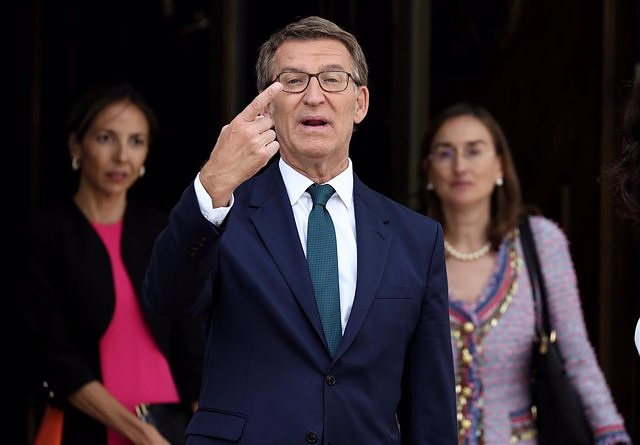 This was stated today during an informal conversation with journalists in the Supreme Court, after the inauguration of the judicial year in which Lesmes has asked him and Sánchez to renew the governing body of the judges and has threatened decisions that you don't like them

After this warning, the popular leader has commented that he is willing to hold a meeting with Pedro Sánchez when he calls him. But yes, he has indicated that he will do so with the conditions that his party had already set to negotiate them before the negotiation was blown up, after the Government's decision to reform the Law to appoint the two judges that correspond to it in the Constitutional Court.

These conditions are, as Feijóo recalled first thing in the morning, to maintain a minimum principle of "independence and decorum" and among them would be: that a minister cannot go to the State Attorney General's Office the day after dismissing or to preside a Supreme Court room; that to be a judge of the TS it is necessary to spend 25 years putting sentences or that to access the judicial career an opposition contest is necessary.

Alberto Núñez Feijóo had thus referred to the renewal of the CGPJ this morning, before the inauguration of the judicial year, during an interview on Antena 3, where he stated that the members of the General Council of the Judiciary have felt "used" by the Government for having "emptied" powers and "intervened" the CGPJ.

In his opinion, the Government's decision to modify the Organic Law of the Judiciary so that the CGPJ cannot appoint the judges of the vacant seats of the Supreme Court and the Constitutional Court "is an attack on the independence" of the governing body of the judges.

When asked if there is going to be a rebellion in the conservative sector of the CGPJ, Feijóo has specified that the laws must be followed. But he has criticized those that the Government has dictated "emptying powers" from the Judicial Power and intervening in it, by preventing it from appointing judges of the Supreme Court and the Constitutional Court when there are vacancies.

SENSITIVE SPEECH BY LESMES, BUT I DON'T SEE THE SENSE IT MAKES

The 'popular' leader, who has been visibly upset that Pedro Sánchez calls him "insolvent", has also referred to the insinuation of the president of the CGPJ, Carlos Lesmes, in his speech that he could resign. In this regard, he has indicated that "it would not make sense for him to resign" because he is the captain of the ship and does not want a collective resignation either.

However, he considers that Lesmes's speech is "sensible" and has also pointed out that the obligation imposed by the Government that the CGPJ have appointed the two magistrates that it must appoint in the TC before September 13 seems "interventionism ".