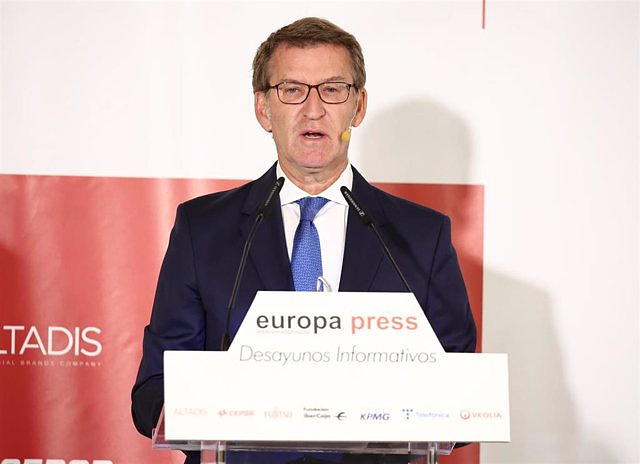 The president of the PP, Alberto Núñex Feijóo, plans to meet this month with the leader of Vox, Santiago Abascal, but has stressed that his idea is to achieve a sufficient majority in the next general elections that allows the PP to govern alone.

At the Europa Press Informative Breakfasts, Núñez Feijóo has confirmed that he has already spoken by phone with Abascal and that the next step will be to hold a face-to-face meeting this month. And he also plans to meet with the president of the PNV, Andoni Ortuzar.

"We talk to everyone. It is true that with Bildu it is difficult to talk because Pedro Sánchez has a monopoly and I am leaving it to him," he ironized.

However, the leader of the PP has reiterated the plans he outlined when he became the party's leader, which is to obtain "a resounding and sufficient majority to govern." "I don't know how to do anything else," he said, recalling his four absolute majorities in Galicia.

Feijóo has recalled that the PP received him assuming that the PP was going to agree with Vox, and with this they tried to "intimidate" in the Andalusian elections, but in the end the PP achieved a large and comfortable absolute majority.

‹ ›
Keywords:
FeijóoSantiago AbascalPPVOX
Your comment has been forwarded to the administrator for approval.×
Warning! Will constitute a criminal offense, illegal, threatening, offensive, insulting and swearing, derogatory, defamatory, vulgar, pornographic, indecent, personality rights, damaging or similar nature in the nature of all kinds of financial content, legal, criminal and administrative responsibility for the content of the sender member / members are belong.
Related News