Maroto says that the PP wants to know if "the red line of embezzlement" that helps other "criminals" will also pass. 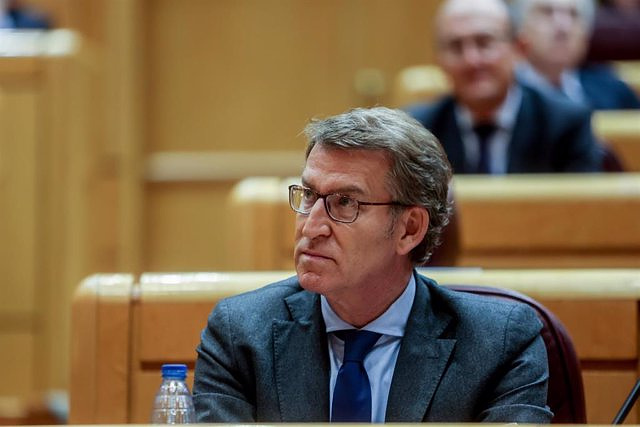 The leader of the PP, Alberto Núñez Feijóo, will ask the head of the Executive branch, Pedro Sánchez, next Tuesday, in the control session of the Government in the Senate, if he is also going to reform the crime of embezzlement to favor his pro-independence "partners" and the former president of the Junta de Andalucía José Antonio Griñán.

"Are you going to continue reforming the Criminal Code to favor members of your party and your government partners?", it reads verbatim in the registered question that Feijóo is going to formulate next week in plenary session of the Upper House.

The spokesman for the Popular Group in the Senate, Javier Maroto, has assured that his party demands from Sánchez a "concrete", "sincere" response and that it "serves" all Spaniards, since, according to what he has said, he is taking steps to "fix" the life of the "coup plotters" and other "criminals".

"What Pedro Sánchez is doing to forgive those who have committed a coup d'état in this country with a final sentence is to strike a blow at the Justice, the Supreme Court, the Constitutional Court and all Spaniards," Maroto declared in a Press conference in the Senate.

Maroto has insisted that the government, by opening the door to also change embezzlement, what it does is "forgive those who have committed a coup" but also favor other leaders convicted of the ERE case, such as Griñán.

The leader of the PP Maroto has indicated that Feijóo's question is "clear" because his formation wants to know if Sánchez is "also capable of passing" the red line of embezzlement, after repealing the crime of sedition.

"In addition to forgiving them the crime of sedition, are you also going to forgive the crime of embezzlement and incidentally going to free one of your own like Mr. Griñán from going to prison?", the 'popular' senator asked himself.

In his opinion, the Spanish "have the right to know what is the moral background and the ethical position of the President of the Government" in this matter. "We know that it is extremely low but we want to know if he is going to surpass himself this time," he added.

After assuring that the Executive of PSOE and Unidas Podemos is "handcuffed" by the independentistas, he has criticized that the Government maintains that this is done to "fix coexistence" in Catalonia when, as he has stressed, Sánchez takes these steps to "fix the Sánchez's persistence at Moncloa".

"The independentistas are capable of making Pedro Sánchez bend the arm, even if that means twisting the arm of a majority of Spaniards who consider it incomprehensible that there is a president of the Government capable of giving in to everything, against many voices of his party and his electoral promises in order to continue a little more in La Moncloa", he asserted.

Maroto has denounced the "traps and lies" of Pedro Sánchez because now he also seeks to "review the crime of embezzlement so that the independentistas can sleep more peacefully." In his opinion, this is a matter of extreme gravity" and that is why Feijóo will take him to the Plenary Session of the Senate.

When asked how the PP will articulate the proposal to maintain sedition and classify the illegal referendum that Feijóo announced on Monday, whether it will be with his own proposal or via amendment, Maroto has limited himself to ensuring that the announcements on specific legislative texts will be made when "they are absolutely mature and contrasted".

‹ ›
Keywords:
Junta De AndalucíaSenadoFeijóoPedro SánchezPP
Your comment has been forwarded to the administrator for approval.×
Warning! Will constitute a criminal offense, illegal, threatening, offensive, insulting and swearing, derogatory, defamatory, vulgar, pornographic, indecent, personality rights, damaging or similar nature in the nature of all kinds of financial content, legal, criminal and administrative responsibility for the content of the sender member / members are belong.
Related News