Feijóo turns to Catalonia: he will present Daniel Sirera tomorrow and on Thursday he will explain his project in a colloquium 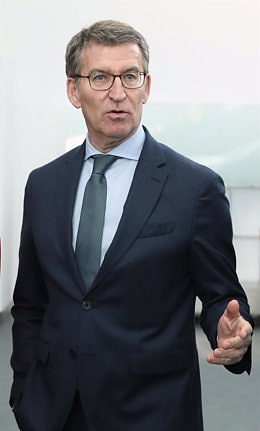 The president of the Popular Party, Alberto Núñez Feijóo, will travel to Catalonia this Wednesday to present his candidate for Barcelona Mayor, Daniel Sirera, and on Thursday he will explain his project at a luncheon-discussion organized by the Círculo Ecuestre.

The head of the opposition, who will intensify his trips to Spain in the coming weeks before the May elections, has set two days this week in Catalonia, a territory where the PP wants to regain ground before the upcoming elections on May 28.

This Wednesday, Feijóo and the president of the PP of Catalonia, Alejandro Fernández, will present the party's candidate for Mayor of Barcelona at a public event, in a session at 7:30 p.m. in the MGS Auditorium in which the provincial president will also intervene, Manuel Reyes.

Last Sunday, in an act in Madrid where Feijóo presented his 50 candidates in the provincial capitals, Sirera stated that in Catalonia "there is no curse that says that the PP cannot govern" and stressed that "among the independentistas and the podemitas there is a sensible alternative that is the PP". "Therefore, we are going to ensure that our party is also decisive in Catalonia", he proclaimed.

The following day, Feijóo will participate in a lunch-discussion at the Círculo Ecuestre de Barcelona, ​​where the head of the opposition "will assess the current Spanish political landscape", according to this entity in its call.

The 'popular' maintain that the 'Feijóo effect' has also spread in Catalonia and their internal data already shows a rise in the party in Catalonia. In the regional elections of February 2021, it touched ground with only three seats compared to 11 for Vox and six for Ciudadanos.

In a recent interview with Europa Press, the deputy secretary for Territorial Organization of the PP, Miguel Tellado, highlighted the growth of his party in Catalonia in recent months and blamed it on the fact that more and more Catalans see Alberto Núñez Feijóo as a ruler for Spain who is "tremendously sensitive to the differential Catalan fact".

"I think that the Catalan citizens see in Alberto Núñez Feijóo a ruler of a historical territory such as Galicia who has known how to govern for everyone, who has his own culture, his own language, his own identity and who is part of Spain just like Catalonia" he declared.

In addition, Tellado stressed that the Catalans perceive, apart from this sensitivity, that the president of the Popular Party "works to unite society and not to divide it as some have tried in recent years."