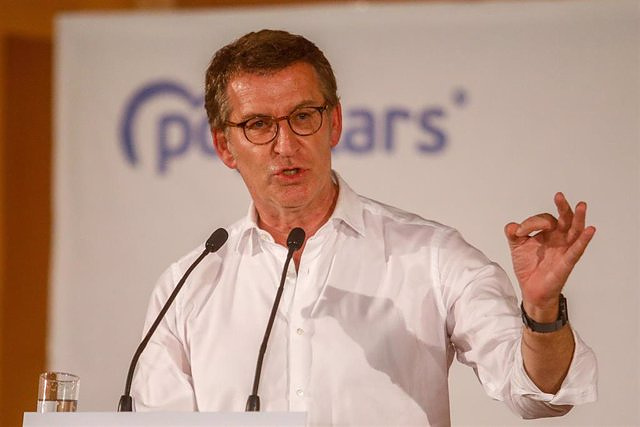 The leader of the PP, Alberto Núñez Feijóo, has summoned this morning the President of the Government, Pedro Sánchez, to censor himself after the Supreme Court ruling on the ERE, recalling that the current head of the Executive came to power with a motion of censorship against Mariano Rajoy after the ruling of the National High Court on the Gurtel case.

After recalling that the ERES sentence is the largest conviction for a corruption case in Spain, Feijóo indicated that if Sánchez was "able to build his motion on what he did", now "there are enough truths" for him to be censored same.

On the other hand, the leader of the opposition has harshly charged Pedro Sánchez's management for stopping Spain with his "misgovernment" that is leading to "economic, social and institutional breakdown". For this reason, he has asked him to have the courage to recover "centrality" and has said that he will find the Popular Party there.

"Spain does not deserve a Government in permanent conflict," Feijóo said in an open-air appearance in the Plaza de la Marina Española, located at the gates of the Senate, a Chamber in which the leader of the PP has held a seat since the past. Month of May. The act was attended by numerous party officials, to whom he has warned that they will have to "shorten the break" because they have "a lot of work ahead of them" and the desire for change is a clamor ".

The leader of the opposition has affirmed that an "increasingly large majority of Spaniards" concludes that "Spain does not deserve the government that it currently has" and to corroborate this affirmation he has reviewed some of the crises that the Executive has faced these months , such as the Pegasus case, what happened with Morocco, the dismissal of the director of the CNI or the pacts with Bildu.

Feijóo has stressed that the PP is the only "real" alternative to the Government of Pedro Sánchez and has stressed that they have "known how to emerge stronger" from their internal crisis - which ended with the departure of Pablo Casado - in "record time". "It is exciting to see that more and more Spaniards believe that the best response lies in this match, this ideology and this team," he said.

In an appearance without questions, Feijóo has denounced that Spain has "misgovernment that slows it down" and has criticized the "constant division" within the Executive and the "erosion with its pacts of most institutions." "Does Spain have the government it deserves?, he has asked himself, to criticize that ERC and Bildu are the" true leaders of misgovernment ".

‹ ›
Keywords:
Audiencia NacionalCaso GürtelRajoyFeijóoPedro SánchezEREPPTribunal SupremoMoción De Censura
Your comment has been forwarded to the administrator for approval.×
Warning! Will constitute a criminal offense, illegal, threatening, offensive, insulting and swearing, derogatory, defamatory, vulgar, pornographic, indecent, personality rights, damaging or similar nature in the nature of all kinds of financial content, legal, criminal and administrative responsibility for the content of the sender member / members are belong.
Related News