Feijóo sets Moreno as an example: the Andalusians have turned "insult and fear" into a "boomerang" against PSOE

Santamaría, Tejerina, Acebes, Bañez, Cañete and Mendez de Vigo accompany the president of the Andalusia Board. 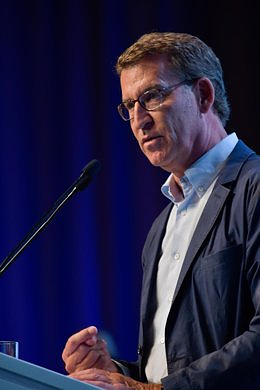 Santamaría, Tejerina, Acebes, Bañez, Cañete and Mendez de Vigo accompany the president of the Andalusia Board

The leader of the PP, Alberto Núñez Feijóo, assured this Monday that the president of the Junta de Andalucía, Juanma Moreno, is a "great leader" and has put his management and his recent victory in Andalusia as an example to follow because, according to underlined, the Andalusians have shown that "insult and fear" have become a "boomerang" against the PSOE. To his knowledge, he is one of the "most brilliant representatives of the new politics."

"Andalusia offers lessons of extraordinary value at this crucial moment in Spanish politics. Andalusians teach us that there are two political weapons that have been irretrievably devalued: insult and fear, tricks that are no longer effective when citizens are highly mature democratic," he proclaimed.

This has been pronounced in the presentation of the conference of the president of the Junta de Andalucía, Juanma Moreno, which has been attended by several Andalusian councilors and a good part of the leadership of the PP -Cuca Gamarra, Elías Bendodo and Juan Bravo, among others- -, as well as the mayor of the capital, José Luis Martínez-Almeida.

Feijóo began his speech by assuring that his "friend" Moreno is a public servant who has just achieved an absolute "historic" majority and who has managed to make his land a model of "stability, leadership and majority rule" after "changing the fate of one of the most important Autonomous Communities in Europe". According to him, he added, this autonomy was previously at the forefront in unemployment data and now it leads job creation.

"Moreno is one of the most brilliant representatives of the new policy," he asserted, explaining that the new policy was used a few years ago as a "flag" by parties born in the "shadow of the great recession of 2008," alluding to to Podemos and Ciudadanos.

Feijóo has pointed out that the president of the European Commission, Ursula von der Leyen, praised him as an "experienced and far-sighted" leader in the PP Interparliamentary this weekend in TOledo, a description that, in his opinion, should be extended to presidents like Moreno. "This will never go out of style", he has exclaimed to underline that the Andalusian president is a "great leader" and a "great administrator for a sensible land".

Feijóo has recognized that "social discontent is a blank field" for messages that, after "questioning politics and shaking society to the maximum", promise "artificial paradises that end in great frustration". "Today this old new policy is already old", he has proclaimed, to add that now "it is limited to resisting the charges".

Of course, he has said that these parties have "infected their style, manners and ability to manage" the PSOE, a party that was once one of the basic pillars of the democratic transition. "Unfortunately for Spanish democracy, those who manage this political formation have currently lost their way or have decided to take a radical path that leads nowhere," he warned, referring to the management of Pedro Sánchez.

In this sense, he stressed that in the coalition Executive of PSOE and United We Can "an old policy has been installed while a really new alternative is emerging" represented by the PP in the face of the "growing weariness" of Spanish society and the ability to "listen" to the Spanish by offering them a "new hope".

"We cannot continue like this. We all perceive a desire for change understood as the recovery of the calm of Spanish politics," he added, adding that citizens want a policy that "prioritizes the priority." THE IMPORTANCE OF "AUTONOMISM"

The leader of the opposition has highlighted that Andalusia offers "another moral", "the importance of autonomy". In his opinion, a "magic" formula is not necessary to channel the diversity of Spanish society because it is already included in the Constitution with the State of Autonomies.

At this point, he has criticized that "some want to make Spanish" a foreign language in Catalonia and the Government of Sánchez "consists of it", something that the PP "will not do". He has also criticized that "some shamelessly disregard" the sentences and the Government "is inhibited". "We will defend all our languages ​​with the instruments of the rule of law and we will do it our way. Intolerance is not fought with more intolerance. We love freedom and we want to hear it in all our languages", he stressed.

The president of the PP ended by paying tribute to the figure of Manuel Clavero Arévalo, emphasizing that "he gave way to a modern, regenerating and open autonomy towards the future", an Andalusianism that "triumphed" in the last elections.

‹ ›
Keywords:
Junta De AndalucíaFeijóoPSOEPPJuanma Moreno
Your comment has been forwarded to the administrator for approval.×
Warning! Will constitute a criminal offense, illegal, threatening, offensive, insulting and swearing, derogatory, defamatory, vulgar, pornographic, indecent, personality rights, damaging or similar nature in the nature of all kinds of financial content, legal, criminal and administrative responsibility for the content of the sender member / members are belong.
Related News