Warns that the Government wants to control the TC to prevent some laws from being ruled unconstitutional. 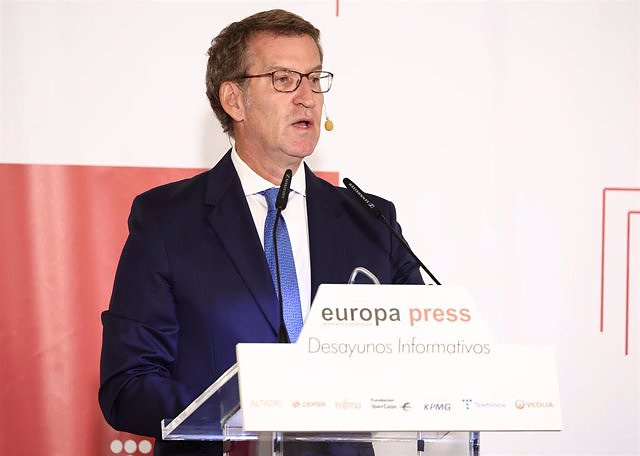 The president of the PP, Alberto Núñez Feijóo, has assured today that the "blackmail" of the Government to the General Council of the Judiciary (CGPJ) is "inadmissible" and has demanded that the Minister of Justice, Pilar Llop, deny that the Executive is pressing to the President of the Council, Carlos Lesmes, to appoint the two magistrates of the Constitutional Court who would correspond to the governing body of the judges.

This was stated during his speech at the Europa Press Informative Breakfasts, where he echoed the information published today by the newspaper El Mundo in which a source from the Executive warned that "if Lesmes does not name, let him forget go to the Constitutional

Feijóo has said that after reading this "in quotes" he requires that the Minister of Justice, Pilar Llop, give explanations and deny that the Government is pressuring the president of the CGPJ and the Supreme Court

This attitude, he added, "is incompatible with respect for judicial independence", as it is, he added, that this Government prohibits the Council from making appointments and "when it wants to return the capacity but only for the TC and with a certain date , September 13". "We had not seen democracy in 40 years," he exclaimed.

For this reason, the leader of the PP has affirmed that the Government "has intervened" in the Judiciary and has a "lack of respect" with the Council that "has no precedent" in democracy. In addition, he has asked that the members of the CGPJ act "in conscience" because the "threats and blackmail from the Government are inadmissible."

In Feijóo's opinion, the first thing the Government wants to do is "control" the TC to prevent some laws appealed in the TC from being ruled unconstitutional.

‹ ›
Keywords:
FeijóoPPTribunal ConstitucionalCGPJ
Your comment has been forwarded to the administrator for approval.×
Warning! Will constitute a criminal offense, illegal, threatening, offensive, insulting and swearing, derogatory, defamatory, vulgar, pornographic, indecent, personality rights, damaging or similar nature in the nature of all kinds of financial content, legal, criminal and administrative responsibility for the content of the sender member / members are belong.
Related News