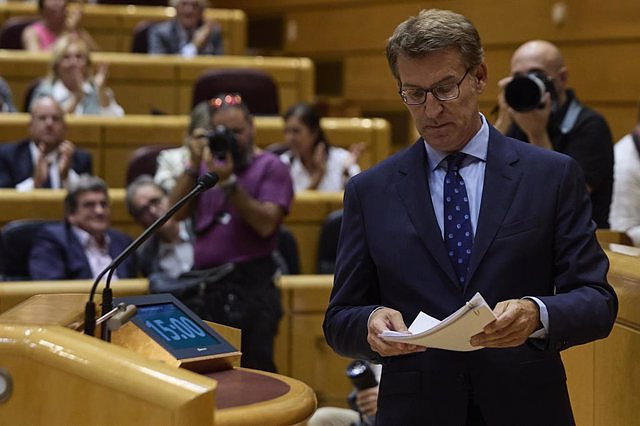 The president of the Popular Party, Alberto Núñez Feijóo, has assured today that the members of the General Council of the Judiciary have felt "used" by the Government for having "emptied" powers and "intervened" the CGPJ. "It is an attack on the independence" of the governing body of the judges, he has exclaimed.

This was stated by the popular leader during an interview on Antena 3, collected by Europa Press, just the day after the debate in the Senate with the President of the Government, Pedro Sánchez and a few hours after the inauguration of the judicial course.

When asked if there is going to be a rebellion in the conservative sector of the CGPJ, Feijóo has specified that the laws must be followed. But he has criticized those that the Government has dictated "emptying powers" from the Judicial Branch and intervening, by preventing it from appointing judges of the Supreme Court and the Constitutional Court when there are vacancies.

"It has modified the Organic Law of the Judiciary and has told the CPGJ that it is left without functions, only with the disciplinary function," said Feijóo, who considers that this has produced "enormous tension" and "disaffection" because the members of the governing body of the judges "have felt used by the Government".

In this sense, Feijóo has criticized that the Executive has prevented the Council from "exercising its mandate", something that he considers "extremely dangerous" because it supposes an "invasion" of the Executive Power in the Judiciary.

For this reason, he has asked the Executive of Pedro Sánchez to "rectify", return the powers to the Council and sit down with the opposition to negotiate the renewal. Regarding this, the leader of the PP has insisted that the PP's proposal is that the 12 judges and magistrates of the CGPJ be appointed by the judges and the 8 jurists of recognized prestige, by the Chambers.

But he added that in an effort to renew the Council, they have shelved this proposal and raised other issues to maintain a minimum principle of "independence and decorum" such as a minister not being able to go to the State Attorney General's Office the day after leaving or to preside over a chamber of the Supreme Court.

He has also proposed "controlling a little the names" of those who have access to members of the Council, to "objectify" and not to put the most related or those who "have made a sentence that interests me the most".

In this sense, he recalled that the PP sent a document on July 11 and "there is no acknowledgment of receipt" for which he has asked the Government what things they do not agree on. "Don't say that we haven't made a proposal, of course we have," he exclaimed.

‹ ›
Keywords:
FeijóoTerrorismoPPCGPJ
Your comment has been forwarded to the administrator for approval.×
Warning! Will constitute a criminal offense, illegal, threatening, offensive, insulting and swearing, derogatory, defamatory, vulgar, pornographic, indecent, personality rights, damaging or similar nature in the nature of all kinds of financial content, legal, criminal and administrative responsibility for the content of the sender member / members are belong.
Related News