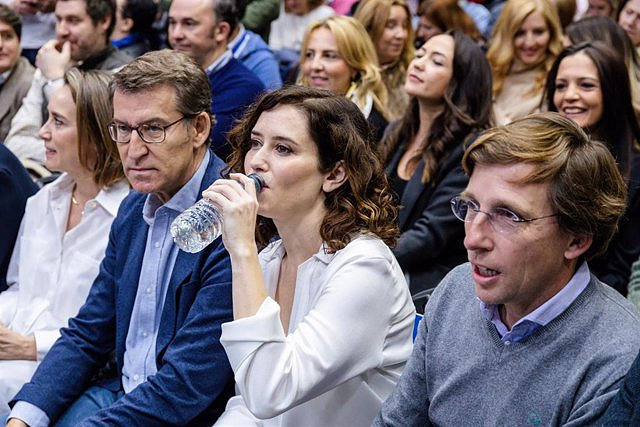 The leader of the PP, Alberto Núñez Feijóo, has intensified this Saturday his clash with Pedro Sánchez, denouncing his "arrogance", "arrogance" and "authoritarianism". After criticizing his pacts with those who want to leave Spain, he has stated that Bildu "has achieved more with Sánchez" at this time than "during all the years of violence" to which he has subjected Spain.

This has been pronounced in an act organized by the PP - under the title 'In defense of a great country' - at the Antonio Magariños Sports Center, located next to the facilities of the I.E.S Ramiro de Maetzu where he studied and played basketball the president of the Government. Previously, the president of the Community of Madrid, Isabel Díaz Ayuso, and the mayor of Madrid, José Luis Martínez-Almeida, spoke.

Before some 2,000 people -according to sources from the organization-, Feijóo has charged hard against Sánchez and his management, warning that he is "wrong" if he believes that the majority of Spaniards are going to remain "quiet, mute" and without reacting. "Not insulting does not mean kneeling down and shutting up," he asserted.

For this reason, the president of the PP has asked to convert the "indignation of what is happening into votes." "Our objective is not to fill the streets but to fill the polls, with free gestures that vote freely," he proclaimed, to which one of the attendees shouted: "We must also fill the streets."

The head of the opposition has thus launched a veiled message to Vox. Santiago Abascal's party has called a demonstration this Sunday in the Plaza de Colón in protest of the repeal of the crime of sedition, while the 'popular' have opted for a campaign of events touring Spain such as the one in Madrid. On Thursday they were in Badajoz, today in Madrid and next week they will stop in Albacete and Zaragoza.

Feijóo has brought the audience to their feet when he has asked those present if they can imagine what could happen if they have Sánchez another four years in the Palacio de la Moncloa. "This has to end, it has to end, and we are going to do it democratically", reaping a standing ovation.

‹ ›
Keywords:
FeijóoPPPedro SánchezBildu
Your comment has been forwarded to the administrator for approval.×
Warning! Will constitute a criminal offense, illegal, threatening, offensive, insulting and swearing, derogatory, defamatory, vulgar, pornographic, indecent, personality rights, damaging or similar nature in the nature of all kinds of financial content, legal, criminal and administrative responsibility for the content of the sender member / members are belong.
Related News