It proposes to discount the bill between 3% and 20% for energy savings and criticizes "contradictions" of the Government on bumping the shopping basket. 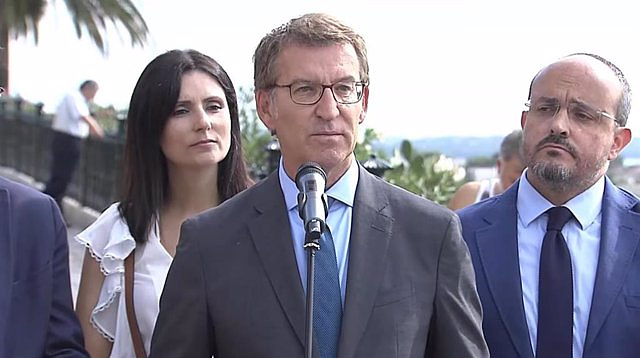 The president of the PP, Alberto Núñez Feijóo, has proposed this Friday "seek a maximum price for hydroelectric, nuclear and renewable energy" agreeing with the sector, something that will be included in a formal proposal on energy that the PP will present on Monday.

"With a maximum price for renewable, nuclear and hydraulic technologies, we will be able to lower prices and we will stop speculating on the price of gas," Feijóo told the media in Tarragona together with the leader of the PP in Catalonia, Alejandro Fernández, and the deputy in the Catalan Parliament Lorena Roldán.

Feijóo has assured that the energy proposal that they will formally propose on Monday includes measures and solutions that "go through technology and not ideology", and has explained that they have discussed it with specialists in recent weeks.

Among the measures, they will include proposals that the PP has already raised, such as discounts for households and companies that save on their gas and electricity consumption --with discounts of between 3% and 20%, depending on the savings-- , and a shock plan so that companies that make intensive use of energy are not forced into employment regulation files (ERE), he said.

He also sees a savings plan for the public sector as necessary, since he assures that it is the largest consumer of energy --with infrastructures such as airports and railway stations-- and that it must set an example "before imposing savings and obligations such as lowering and turning off shop windows, or tell merchants what to do, as if they didn't know".

In addition, he recalled that the PP defends "debureaucratizing" renewable energy and putting all available energy sources into operation, also advocating maintaining existing nuclear power plants and betting on other sources of energy, such as hydraulics.

On the other hand, he has guaranteed that the PP will continue defending lowering personal income tax for families earning less than 40,000 euros, along the lines of what some autonomous communities have promoted: "If the socialist party considers that it is good to lower the income tax, income in the Basque Country and Navarra, why isn't it good for the whole of Spain?

On the proposal of the second vice president of the Government, Yolanda Díaz, to seek an agreement with large distributors to cap prices of basic food products in the shopping basket, Feijóo has criticized the "contradictions" in the Executive after ministers of the PSOE have rejected the initiative.

He has said that these discrepancies seem like a "joke" and has warned that "these permanent contradictions between the president and his vice-presidents, between the vice-presidents and the ministers, are already a sign of the very deep deterioration that the Government of Spain is suffering in this moment".

"The sainete is very good to celebrate parties but when you talk about food you cannot fool the citizens from the Government", and he has asked for respect from the citizens who have difficulties to make ends meet and fill the basket of the purchase.

‹ ›
Keywords:
FeijóoPPEnergía Nuclear
Your comment has been forwarded to the administrator for approval.×
Warning! Will constitute a criminal offense, illegal, threatening, offensive, insulting and swearing, derogatory, defamatory, vulgar, pornographic, indecent, personality rights, damaging or similar nature in the nature of all kinds of financial content, legal, criminal and administrative responsibility for the content of the sender member / members are belong.
Related News